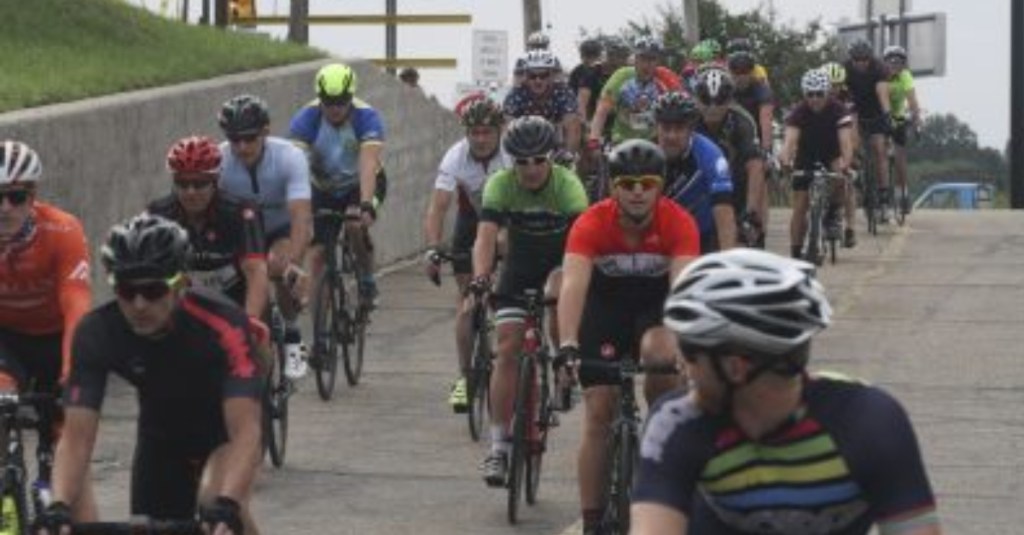 Cyclists ride down the hill onto the Old Mississippi River Bridge during the 9th Annual Bricks and Spokes ride in 2018. (Courtland Wells/The Vicksburg Post)

After about a year of discussion and planning, Vicksburg’s proposed bicycle trail is moving toward the design phase, which organizers say will set the estimated 9.5-mile route from the Mississippi Welcome Center on Washington Street to its terminus at Haining Road.

From Haining Road, he said, cyclists can continue to U.S. 61 North and catch the Great River Road Bike Trail that runs from Walls in DeSoto County to Tunica.

The project is funded through a $127,000 federal Transportation Alternative Program grant administered by the Mississippi Department of Transportation with $92,000 in federal funds and a$35,000 match from the city. The grant is a reimbursement grant, which means the city pays for the work and is reimbursed through MDOT.

“What we’re doing is putting together the first packet to MDOT to kick this (project) off,” Richardson said. “MDOT will set up a kickoff meeting to discuss the process and the (bike trail) committee will rewrite the route and nail it down.”

The process leading to the grant began about a year ago when District 5 Supervisor Kelle Barfield and business owner Linda Fondren approached the Board of Mayor and Aldermen about a bike trail through the city.

“Various people believed there was a real untapped asset downtown in the way of cycling paths,” Barfield said. “If you’re a cyclist, you know that communities that set aside designated safe lanes for cycling do very well in attracting outsiders by promoting health and just offering a way for people to get around more quickly than on foot but in a way that they’re not being distracted drivers.”

One of those interested in bike trails was Fondren, who had been appointed to the Central Mississippi Planning and Development District Board of Directors by Board of Supervisors President Dr. Jeff Holland to look into opportunities and funding that will enhance the quality of life for Warren County.

Fondren was also a member of the Vicksburg Main Street Board and the committee for a biking trail, which included Richardson.

Mayor George Flaggs Jr. supported the idea and pledged $35,000 in city funds toward the project and a committee of city and county officials was also appointed to study the project. The committee applied for the Transportation Alternative Program Grant, and the Board of Mayor and Aldermen hired Neel Schaffer Engineers to prepare the path’s design.

The committee met on Aug. 23 to review the plans for the trail and see how much work can be accomplished with the grant funds.

“You can always add to the cycling paths in later stages,” Barfield said. “We targeted the historic downtown in particular because what got us points in our application was the number of historic markers, buildings and museums that would be more accessible on bikes using these lanes.

“We started with a vision, we mapped a plan, we secured some funding from state resources and now we’re ready to put into action,” she said.

But the project is far from finished.

Before work can begin, Richardson said, MDOT must perform its due diligence to determine if rights of way or rail crossing access must be acquired, do an environmental impact study and the Department of Archives and History must determine if any historic areas will be affected by the project.

“They can do that during the design phase,” Richardson said, adding the reviews and assessments “should go rather quickly because it’s all on existing city streets. It’s going to be a signage problem and a painting project more than anything else.”

MDOT must also approve the trail’s design and the eventual project bid accepted by the city before work can proceed.

Richardson said he would like to see future bike trails that include Cedar Hill Cemetery, the Vicksburg National Military Park and other areas of the city.

“What I would hope is we wouldn’t have to get a grant,” he said.

“But I think it’s real important to make sure the first one we do is done very properly and legitimately for the city’s protection and the bicyclists’ protection; it’s that extra safety step,” he said.