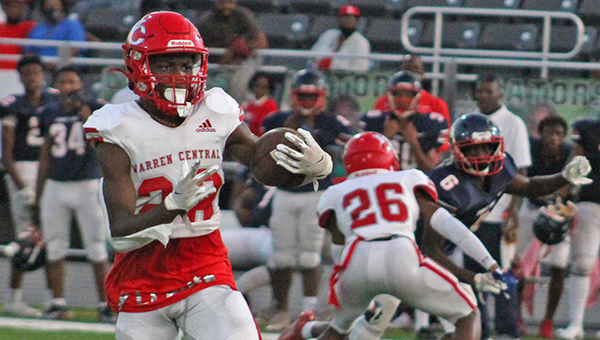 Josh Morgan has been part of enough Vicksburg vs. Warren Central football games, both as a player and a coach, to have a good feel for the rivalry.

Of course, it’s a lot more fun when you’re on the winning side as often as Morgan’s Vikings have been lately.

Warren Central has won the last nine meetings with the Gators. The streak has included three shutouts, only one game decided by less than three touchdowns, and four consecutive meetings in which Vicksburg has scored seven points or less.

The Vikings (1-0) will try to push the winning streak into double digits Friday night at Memorial Stadium, but they’re still not taking anything for granted even if it has seemed like an automatic win the past few seasons.

“We know we’re going to have to play each and every time we play them. It’s a year by year thing, and a team by team thing, and we’ve just been fortunate to come out on the winning side,” Morgan said. “It comes and goes. We’ve been fortunate to have some success here lately.”

The 2021 Warren Central-Vicksburg game finds both teams with similar makeups. Vicksburg had nearly a dozen sophomores and first-time starters on the field for its season opener last week against Germantown, while Warren Central had 15 new starters playing in its 27-0 win over Forest Hill.

In addition to the newcomers, several players were at different positions. Dontavius Bell, a three-year starter at offensive tackle, played center for the first time in his high school career because several other starters were under COVID-19 quarantine.

Warren Central had a modest 210 total yards of offense, but only committed one turnover. Considering the number of new players getting their first real game experience, Morgan was happy with the performance.

“I was proud of our guys. We asked them to play really clean and be efficient, and we were good with our in-game management. The quarterbacks ran the team well,” he said. “When you look at our team as a whole, of course there were things we could have done better and we’re going to work our tails off to get better, but we did the things we talked about doing and that was not beating ourselves and consistently staying in front of the chains, and taking care of the football.”

A dominant defensive effort also helped, of course. Forest Hill only had 82 total yards, and Warren Central’s defense registered three takeaways and three sacks. Jaevian Mims intercepted three passes, one of which was returned 45 yards for a touchdown.

“We played a lot of guys and were able to keep our guys fresh. We got constant pressure on the quarterback and didn’t give up the big play. As a unit, that’s the type of group we try to be,” Morgan said. “It’s about being a team and winning as a team. That’s how we try to win ballgames, is together in all three phases, and I thought we did a good job with that.”