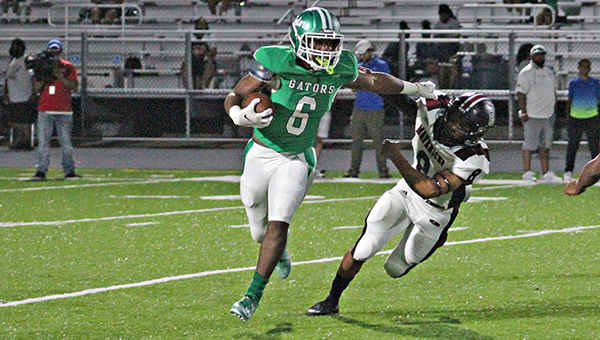 When he stepped back to assess his team’s performance in the Red Carpet Bowl, Vicksburg High head coach Todd McDaniel expressed some understandable frustration.

The Gators missed on three chances to score in the red zone against Germantown, gave up a long interception return for a touchdown, and let a potential win turn into a 34-14 loss.

Looking a bit deeper, though, he pointed out something else — namely, the Gators had more than a dozen sophomores in the starting lineup, went toe to toe with a Class 6A Germantown team featuring several Division I recruits, and there are still nine games left on the schedule

Considering all of that, he said, there’s no reason — or time — to panic as the schedule shifts into Week 2.

“We had two or three offensive linemen who it was their first start, two 10th-grade backs in the backfield who it was their first start with two other 10th-grade backs who started last year, and defensively we only had two (returning) starters over there,” McDaniel said. “The sky is the limit for this team. It is not instant grits. We don’t play John Madden. We play real football. So hopefully we get the opportunity to keep growing and get better.”

The next opportunity is a big one. Vicksburg will host Warren Central (1-0) on Friday in the 41st meeting between the crosstown rivals. Warren Central has won the last nine — eight of them by at least 17 points — and ending the streak is important for Vicksburg on several fronts.

Besides gaining bragging rights for the first time in a decade, a win Friday would give a huge momentum boost heading into next week’s region opener against Canton.

“That would be awesome for us to go into district with momentum and a win over our crosstown rivals. But that’s neither here nor there. We have to do the things we need to do and get prepared to win the football game,” McDaniel said.

On paper, Vicksburg and Warren Central might be more evenly matched than they’ve been in several years. Warren Central had 15 new starters on the field in its Red Carpet Bowl game against Forest Hill last week. Vicksburg didn’t have quite that many, but did have a host of 10th-graders with a half-season or less under their belt.

Both teams also rely on fast, swarming defenses and offenses that run the football.

“It’s a big rivalry. All across the state, this is the game of the week. But most importantly, we want to continue to see our kids grow week by week. The biggest growth we will see every year is from the first game to the second game,” McDaniel said. “I think this is going to be a very competitive game. I think it’s going to go down to the wire.”

McDaniel’s first go-round with Warren Central resulted in a 17-0 loss in the 2020 opener. It was one of two shutouts to start the season, but the Gators improved as they went along and rebounded to reach the MHSAA Class 5A playoffs.

McDaniel sees a similar, but better trajectory, for this year’s squad.

“It’s much different this year. I had six weeks to prepare for a season (in 2020). We got started the Monday after the playoff game this past year and I had the opportunity to be with my kids for seven or eight months to get prepared for a season,” McDaniel said. “The program is still nowhere near where we want it to be right now. We are on the runway. We’re in our seats and the pilot is giving us our instructions. We’re ready to take off.”