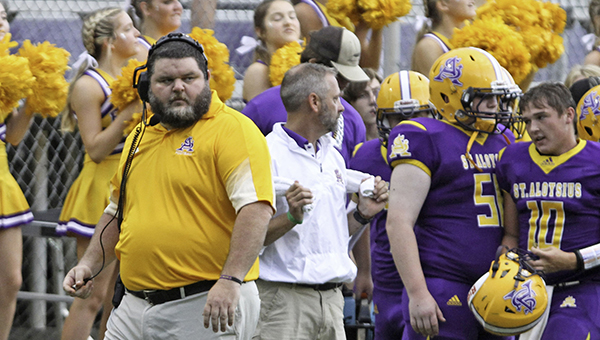 It’s Week 3 for St. Aloysius, but the key number is two.

The Flashes have played two games, and have two losses, and now they’re going on the road to play an opponent with two state championship trophies in its case.

St. Al (0-2) will play its District 3-4A opener Friday night against two-time defending MAIS Class 4A champion Riverfield. Riverfield is also 0-2, with its losses coming by 26 and 21 points, but St. Al coach Bubba Nettles said his team is not in a position to count the Raiders out.

A different form of the word two is also on Nettles’ mind this week — too, as in too many penalties.

The Flashes have been flagged 17 times for 165 yards in their first two games. Worse, the penalties have wiped out several potentially game-changing plays.

In a Week 1 loss at Park Place, an illegal block erased a long run by quarterback Tristan Wilbanks as the Flashes tried to erase a 22-point halftime deficit. An unsportsmanlike conduct penalty was tacked on at the end, and instead of having the ball at Park Place’s 25-yard line they were pushed back to their own 35 and wound up punting.

Earlier in the second half of that game, an illegal block stalled a drive in the red zone. Last week against Centreville Academy, a holding penalty negated a long touchdown run by Padre Gray. St. Al wound up losing both games by two touchdowns.

Nettles added that the ill-timed penalties are as draining mentally as they are strategically. Having a big play or even points taken off the board, and instead facing a long-yardage situation, is demoralizing, he said.

“The distance is one thing, but the number — I think it was nine or 10 — we can’t do that as an offense,” Nettles said. “You drive it down the field to punch it in the end zone, and the next thing you know it’s third-and-30. We are not mentally capable of overcoming that, so it’s just best not to put ourselves in that situation to begin with.”

Nettles planned to emphasize blocking techniques in practice this week to help reduce the holding and illegal block calls that have plagued his offense so far. He’s also emphasizing the things the Flashes have done right.

After falling behind 40-18 at halftime, St. Al held Park Place to 23 yards and no points in the second half. If not for its two short-circuited drives, as well as two early kickoff return touchdowns, it might have pulled out a win. Instead, it lost 40-26.

Then the Flashes led Centreville 21-14 late in the first half, but were outscored 28-6 over the last 26 minutes and lost 42-27. They scored midway through the fourth quarter to pull to within a point, botched a PAT, and then gave up two touchdowns late.

Both games were more competitive than the final score might indicate, which gave Nettles plenty of encouragement that his team is on the right path. Now they just need to fix a few things to turn their effort into more tangible results.

“That’s two. We should be 2-0. The kids know it. I know it. Obviously we are shooting ourselves in the foot, and that starts with the penalties and everything else, and that starts with me. I take full responsibility for that and we’re going to fix it,” Nettles said. “We are a pretty good football team. Our record, unfortunately, doesn’t indicate that. But these kids are fighting from the first quarter to the end of the fourth quarter.”