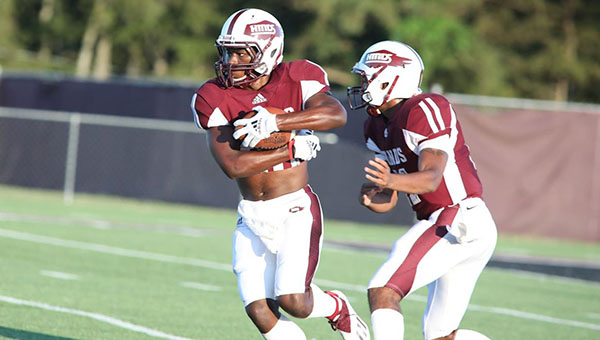 CLARKSDALE — Lately, Coahoma Community College seems to save its best for first.
Coahoma used a couple of big plays in the first half, and a 1-yard touchdown run by quarterback Kennique

Bonner-Steward in the second half to beat No. 13 Hinds Community College 21-14 in the season opener for both teams on Thursday.

Coahoma only won six games from 2017-20 — half of them during the 2020 COVID-shortened season — but has now won three consecutive season openers.

“I thought we beat a really good football team tonight,” Coahoma head coach Travis Macon said. “This is the new Coahoma and if you come to our backyard, you better be ready to fight (for) four quarters.”

Jamarian Samuels scored a pair of touchdowns for Hinds, on runs of 14 and 12 yards. The latter gave Hinds a 14-13 lead early in the second half, but Coahoma answered with Bonner-Steward’s short touchdown run and a two-point conversion to go in front for good.

Coahoma also scored on a 69-yard punt return by Daylon Croom and a 62-yard pass from Bonner-Steward to Leroy Hollingshead in the first half.

Hinds will return to action against Holmes Community College on Sept. 9 at 6:30 p.m., at Joe Renfroe Stadium on the Raymond campus.

Coahoma will also play at home on Sept. 9, against Pearl River.

Rico Dorsey caught two of Short’s touchdown passes, including a 32-yarder that was part of a 28-point burst in the second quarter that gave Gulf Coast a 35-7 halftime lead. Dorsey finished with four receptions for 72 yards. Jalen Bracey led the Bulldogs with five catches for 91 yards and one TD.

East Central’s only touchdown came on a 26-yard pass from Gabriel Larry to Keyser Booth in the fourth quarter.
East Central finished with 94 total yards and was 0-for-16 on third down conversion attempts.

Northwest 31, Co-Lin 12
Northwest Mississippi quarterback Michael Hiers threw for 306 yards and two touchdowns to lead the Rangers to a season-opening victory over Copiah-Lincoln.
Jaquerrious Williams ran for 89 yards, and D.T. Sheffield had four receptions for 124 yards and a TD for

Northwest. Sheffield’s 59-yard TD reception in the opening minute of the second half, and a 1-yard TD run by Jamarien Bracey with 5:06 left in the third quarter, gave Northwest a 28-6 lead.

Bobby Shanklin ran for 48 yards and a touchdown to lead Co-Lin.

Tony Brown scored Pearl River’s touchdown on a 7-yard run, and Bryce Wallace was 18-of-32 passing for 229 yards. Wallace also had 40 rushing yards. Tavion Smith caught seven passes for 106 yards. The Wildcats, however, committed five turnovers and had 15 penalties for 114 yards to derail an otherwise solid offensive performance.

Jones finished with 326 rushing yards as a team. Robert Henry totaled 85 yards and a touchdown, and Paul Hughes II had 37 yards and a TD.