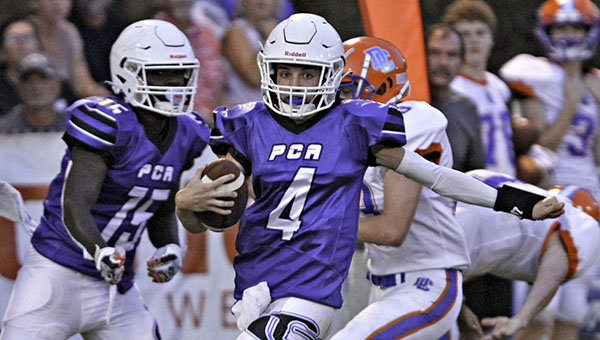 Jace Riggs threw three touchdown passes and ran for another score, Tyler Washington accounted for three touchdowns — one passing, one rushing and one receiving — and PCA set a school record for most points in a game in a 70-6 rout of Discovery Christian.

“It was good. We played hard. It was back to what we did in Week 1,” PCA coach Blake Purvis said. “Everybody we put in the game performed well. We didn’t have much of a fall off, and everybody played hard and played physical.”

Washington broke off a 65-yard touchdown run on the first play from scrimmage, and PCA poured it on from there. Washington threw a long touchdown pass to Willie Rogers in the first half and caught another from Riggs as the Eagles rolled to a 50-6 lead at halftime.

Even with a running clock in the second half, they managed to score three more times. Gage Palmer returned the second-half kickoff for a touchdown, while John Wyatt Massey and Bridger Jung had rushing touchdowns.

PCA’s other touchdowns were scored by Zack Ashley on a 5-yard pass, and Thomas Azlin on a 65-yard pass.

“Opening at home and playing a good, complete game for the third week in a row was good,” Purvis said. “Any time you’re playing physical and dominating the line of scrimmage you have a chance to win. I’m pleased with the physicality on both sides of the ball.”