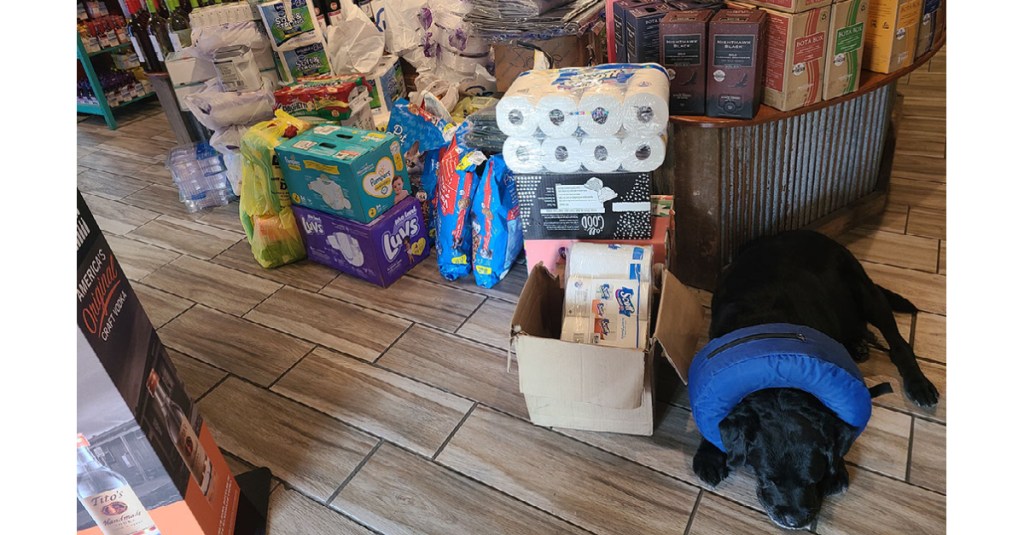 Items collected by Christen and Charles Toney will go toward helping victims of Hurricane Ida in Louisiana. (Photo submitted)

Vicksburg resident Allen Pugh wanted to help those affected by Hurricane Ida, and when locals found out he was planning to take supplies to those in need, donations began rolling in.

“People have been very generous. It has been amazing,” Pugh said, adding that in times of crisis he has found folks in his hometown respond to the call.

As a Category 4 Hurricane, Ida was a monster of a storm.

With wind speeds of 150 miles per hour, it is now tied as the 5th-strongest hurricane to ever hit the U.S. mainland.

It had been predicted Vicksburg would be in Ida’s path, but thankfully, the storm veered east, and locals were spared.

Unfortunately, that was not the case for many living in portions of South Louisiana, where Ida first made landfall.

New Orleans was left without power and towns like LaPlace and Grand Isle, La. were ravaged.

Growing up in a family that has shown compassion to those in need, Pugh said, the desire to go and help those in Louisiana who have lost power, water, homes and business, came naturally.

“When something like this happens it just comes over me to go and assist,” he said.

Pugh, who served in the Army and was a member of the Vicksburg Fire Department, also reached out to those in need during the February ice storm and most recently flew to Alaska to help search for a fellow Purple Heart recipient who had gone missing.

With his truck loaded down with gas, water, non-perishable food and dog food, Pugh made his first trip to southeast Louisiana earlier this week.

He made stops in Amite, Luling, Galliano and Lockport, La.

On Friday, Vicksburg residents Charles and Christen Toney along with Roy and Jaime Simmons, Melissa Reeves and Adam Logue left to do the same.

“We’re hoping to get all the way down to the ground zero where they were hit the hardest,” Christen said.

She said they had been in contact with some of the crews who are in the hardest-hit areas and are aware that law enforcement checkpoints are turning people away, but said she feels confident they will be able to get through.

“We have three trucks with trailers,” she said, that are loaded with three large containers of fuel, pallets of water and dog food.

Christen said she posted on Facebook they were going to take supplies down to people affected by the storm, and the post had a tremendous response.

People from out-of-state even responded, she said.

“It has been unreal. People have been donating a lot,” she said, with some of the donations coming in the form of cash. More than $10,000 has been received.

Christen said they used a “good chunk” of the money to buy tarps and fuel.

“We are going to cook for them while we are down there,” she said.

The Toneys have a charter boat business on Grand Isle, so going down to the affected areas and helping is personal.

“Our friends, who are really like family to us, have had substantial loss and we couldn’t just sit back and watch it on Facebook anymore. They have lost their businesses and their houses. They don’t have electricity and they don’t have anywhere to go,” she said, adding their friends don’t want to leave because they want to stay and protect what they have left.

Both Pugh and Toney agreed, the outpouring of donations for those in need has been heartening.

“I think there is something to be said about the number of people that have approached us wanting to help. I’ve been blown away. It’s truly refreshing in the world we are living in today to see the good come out in folks,” she said.

If people want to continue to donate, Pugh will be making a second trip to the storm-ravaged areas and Toney said, she will make sure donations she receives gets to those in need. Donations can be dropped off at Toney’s 61 N Liquor and Wine, 700 Highway 61 N., at Pugh’s place of business, Patriot Motorsports, 1029 Highway 61 North or Fire Station 8 by Home Depot.