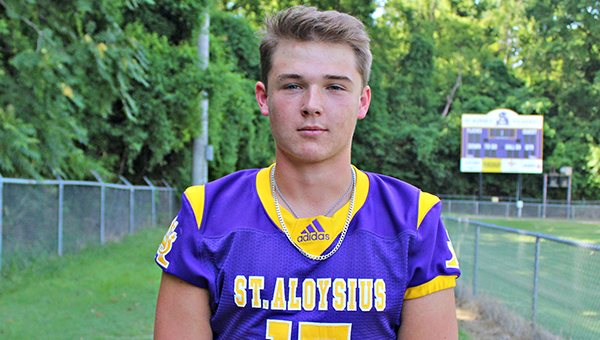 St. Aloysius quarterback Tristan Wilbanks threw a touchdown pass and ran for another TD in a 28-21 loss to Riverfield Academy on Friday.

Each week so far, the St. Aloysius Flashes have developed a new and crippling weakness.

First, it was special teams. Then, it was penalties. For the second game in a row Friday, it was big plays and an inability to sustain momentum.

Brett Whorton scored three touchdowns, and Riverfield Academy scored 21 straight points in the second and third quarters to beat St. Al 28-21 in the MAIS District 3-4A opener for both teams.

St. Al (0-3) led by a touchdown just before halftime, but Riverfield (2-1) scored late in the second quarter and got another TD from Whorton in the third to take the lead for good.

St. Al coach Bubba Nettles said he was pleased with the team’s effort, but frustrated to let another winnable game slip away. The Flashes also led Centreville Academy in the first half last week before losing 42-27.

“No loss is ever a good loss, but to see these kids still fighting and still trying was great,” Nettles said. “We eliminated the penalties like I said we would. Every week something else pops up. It’s constantly putting out fires. We gave up two long touchdown runs. You erase those and it’s a different ballgame. Two plays.”

Padre Gray had a rushing touchdown for St. Al, while quarterback Tristan Wilbanks threw a TD pass to Carter Magee and ran for another score.

Trailing by seven points, St. Al got the ball back with 22 seconds left at its own 32-yard line. Wilbanks completed a 24-yard pass to John David Liggett to move across midfield with five seconds left, and got one final play off as time expired.

Wilbanks heaved the ball toward the end zone on a hail mary play, but it fell incomplete.

St. Al will return home to play Brookhaven Academy next friday at 7 p.m. at Balzli Field.