Warren Central scratches out a victory over Vicksburg 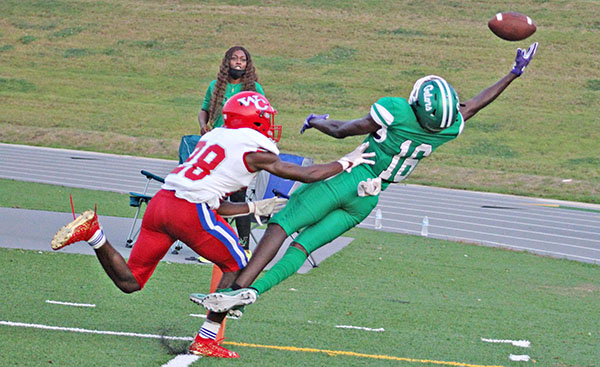 Vicksburg's K.D. Sims reaches for a pass on a two-point conversion attempt as Warren Central's Jaevian Mims (28) defends. The conversion was no good, and Warren Central went on to beat Vicksburg 7-6 on Friday. (Ernest Bowker/The Vicksburg Post)

After two possessions, it looked like the latest edition of the River City Rivalry game between Vicksburg and Warren Central might be a high-scoring shootout.

It quickly devolved into a low-scoring, ground-and-pound affair, however, and that has always been right in Warren Central’s wheelhouse.

T.J. Thompson rushed for 101 yards and his team’s only touchdown — a 3-yard burst late in the first quarter — as Warren Central won a hard-hitting battle of defenses and beat the Gators 7-6 on Friday night.
Warren Central ran on 41 of its 44 offensive plays, and gained 179 yards.

Warren Central (2-0) beat Vicksburg (0-2) for the 10th consecutive time, and held VHS to seven points or less for the fifth straight meeting. Unlike most of the past decade in this series, however, the Gators went toe-to-toe with their cross-county nemesis and nearly pulled out a win.

A holding penalty erased a go-ahead touchdown pass late in the third quarter, and the Gators only ran four plays in the last 14 minutes of the game.

“I’m proud of my kids and the way they played. They played for the entire 48 minutes. That’s something we haven’t been accustomed to in the past few years. Sooner or later we’re going to get over that hump,” Vicksburg coach Todd McDaniel said. “Two 6A schools come in here, with one of the best running backs in the state and one of the best defensive linemen, Warren Central has a great defense but we did pretty good. We just have to punch it in. We’re going to continue to grind.”

This Warren Central vs. Vicksburg game will be remembered as a defensive slobberknocker. The teams combined to throw eight passes and did not score after the first quarter.

Even though the running games were the story on offense, things started fast. Vicksburg took the opening kickoff and went right down the field on an 11-play touchdown drive. Alex Jefferson capped things off with a spectacular 5-yard run in which he started to his right, broke a tackle on the hash mark, reversed field and wound up crossing the goal line just in front of the left pylon.

The two-point conversion try failed, leaving it 6-0, and then Warren Central answered.

Thompson carried the ball on six out of seven plays, including a 28-yard run and the 3-yard touchdown run to finish it off, and Brandon Gilliam kicked the PAT that turned out to be the difference in the game.

“My line, they’re the best. They came out strong and kept on pounding, and (Vicksburg) couldn’t take that,” said Thompson, who carried the ball 19 times in the game.

And, with 1:39 left in the first quarter, that was just about it for the offensive highlights. Between both defenses playing well and both offenses employing a run-heavy, grind-it-out strategy, the last three quarters were marked by long possessions that didn’t amount to anything in the end.

Warren Central had a promising drive stall just inside the 30 at the end of the first half, while Vicksburg’s best drive ended in heartbreak.

The Gators got to the 13-yard line late in the third quarter before penalties and a stiffening WC defense put them into a fourth-and-18 situation. Quarterback Ronnie Alexander hit K.D. Sims for an apparent touchdown, but it was negated by a holding call.

The Gators were backed up 10 yards and went for it again, but only gained five of the 28 yards that they needed to keep the drive alive.

“That’s something we’ve got to correct. Sooner or later, we’re going to grow up. And once we grow up, we’ll be fine,” McDaniel said. “I’m not mad at them at all. They played their behinds off. And if they continue to get better and better, we’re going to be something to be reckoned with in the future.”

Vicksburg’s last drive resulted in a turnover on downs in the fourth quarter. Going for it on fourth-and-1 from their own 26, McDaniel said he instructed his team to try to get Warren Central to jump offsides. A miscommunication resulted in the ball being snapped, and most of Vicksburg’s players didn’t move with the ball. Jamichael Adams took the handoff and had no chance. He was swarmed in the backfield for a 5-yard loss.

Warren Central took over at the 21-yard line and held the ball for the last 5 minutes and 15 seconds. Thompson gained three yards to convert a third-and-2 inside the 5-yard line with 1:12 remaining, and the Vikings ran out the clock.

“We had some guys out, and we learned a lot and we’re growing a lot. We rallied around it. It was a hard fought game and we’re very thankful for the win,” Morgan said. “This game never surprises me. One of the things you have to do is be able to slip, regrip, and stay even-keeled, and we were able to do that. We settled down and in the second half made some adjustments, and I thought played a little better.”