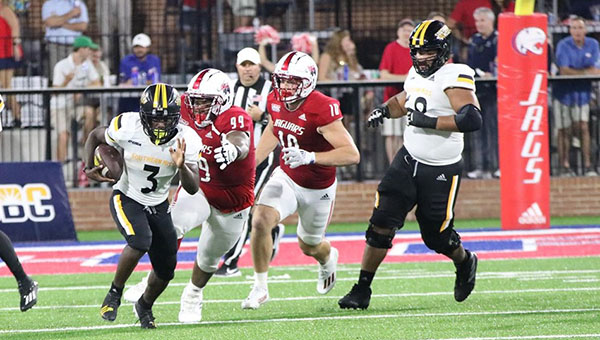 MOBILE, Ala. — In a matchup of head coaches making their college debuts, Kane was a little more able than his opponent.

Jake Bentley threw two touchdown passes and ran for another score, and South Alabama scored 31 unanswered points to defeat Southern Miss 31-7 Saturday night in the season opener for both teams.

The loss ruined the debut of Southern Miss coach Will Hall, but South Alabama’s Kane Wommack moved his career record to 1-0.

Southern Miss jumped out to an early lead in the as it capped a 16-play, 73-yard drive with a 1-yard Trey Lowe touchdown run with 3:55 left in the first quarter.

The Jaguars responded with a scoring drive of their own. Bentley threw a 48-yard pass to Jalen Tolbert to move the ball inside the 5-yard line, and then finished it three plays later with a 1-yard TD toss to Trent Tyre.

After Southern Miss fumbled the ball on the ensuing kickoff — the first of its three turnovers — South Alabama took advantage of the miscue to gain the lead for good. The Jaguars got the benefit of a roughing the passer call during the pivotal drive, helping lead to a 5-yard pass from Bentley to Kareem Walker to put them up 14-7.

Bentley scored on a 1-yard run to make it 21-7 on the opening possession of the second half, and

Davyn Flenord returned an interception 48 yards for a touchdown in the final minute to cap the victory.

Lowe was 13-of-29 passing for 133 yards, and also ran 19 times for 33 yards and a touchdown. He was sacked four times, however, and threw two interceptions.