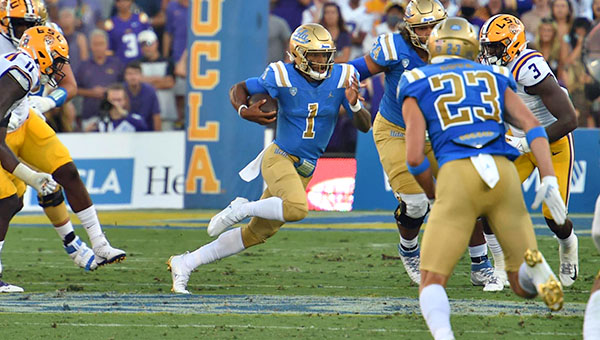 PASADENA, Calif. (AP) — Dorian Thompson-Robinson and UCLA picked up their third win over a ranked opponent during the Chip Kelly era Saturday night. This 38-27 victory over No. 16 LSU in a nationally-televised prime-time game will have more resonance nationally.

“It’s really just been a long time coming for this team. It’s kind of emotional,” UCLA linebacker Bo Calvert said. “There’s been some tough times and to just push through that, I’m really proud of our guys.”

The Bruins were 10-21 in Kelly’s first three seasons, but have won their first two games to start a season for the first time since 2017.

Thompson-Robinson led the way. After struggling in last week’s opener against Hawaii, the junior bounced back by completing 9 of 16 passes for 260 yards, three touchdowns and an interception. The Bruins’ running backs averaged 7.3 yards per carry as junior Zach Charbonnet had his second straight 100-yard game with 117 yards on 11 carries and a TD. Brittain Brown added 78 yards on 14 carries, including a fourth-quarter touchdown.

“If we are running the ball well, we’ll stick with what’s right. But I think that if you look at the play-action passes today, those were huge for us,” Kelly said. “I’m happy with the way Dorian played. I think that he’s going to get better each week, and that is a positive for us.”

One of those play-action passes led to a big TD early in the second quarter as Thompson-Robinson connected with Dulcich for a 75-yard score to tie it at 7.

“In big games, big players step up. Even though I didn’t have many opportunities, we had to maximize those that we got,” Thompson-Robinson said.

Charbonnet’s 12-yard run off right end with 9:49 remaining in the second quarter gave UCLA a 14-7 lead that it did not relinquish.

UCLA held LSU to 48 rushing yards and forced a key turnover in the third quarter when Caleb Johnson intercepted Max Johnson’s pass and returned it 34 yards to the LSU 17. Three plays later, Thompson-Robinson connected with Chase Cota for a 14-yard TD to extend the Bruins’ lead to 21-10.

Thompson-Robinson’s 45-yard TD toss to Kyle Phillips extended the lead to 38-20 midway through the fourth quarter.

Johnson was 26-of-46 for 330 yards, with three touchdowns and an interception. Kayshon Boutte finished with nine receptions for 148 yards, including all three scores.

“I think it’s both. UCLA did a good job of just playing the run and being in the right spots, but we’ve got to get it corrected as an offense, and that will be done,” Johnson said.

It is the second straight year LSU has lost its opener. The Tigers had to leave campus last weekend due to Hurricane Ida and spent most of the week practicing in Houston before arriving in Los Angeles on Thursday.

“I felt good about this football team going in. But you look and we had like 50 yards rushing and they had 200-something yards rushing,” coach Ed Orgeron said. “They were all over the quarterback. And they made some big plays and we gave up big plays on defense again, so those are things that are reoccurring. We’ve got to get them fixed.”

It is the first time in 13 years a Pac-12 team has defeated a ranked Southeastern Conference squad. Coincidentally, UCLA was the last to do it, when it beat Tennessee in 2008. The Bruins could be ranked for the first time since Sept. 10, 2017, when the AP Top 25 is released on Tuesday.

“You don’t have to write down a ranking for these guys. They know they played really well tonight,” Kelly said. “It’s good to talk about for other people but not us.”