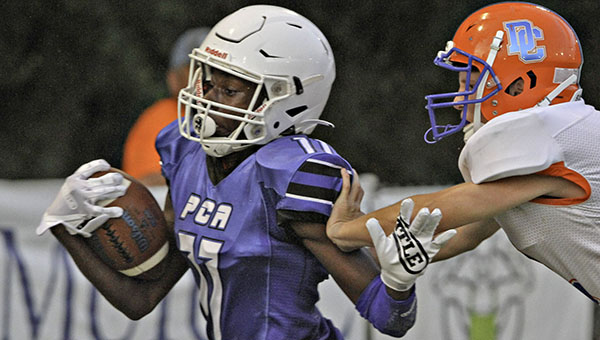 Welcome to the 2021 debut of Four Down Territory. Each week we’ll look at four notes, nuggets, stats and trends from the weekend that was in Mississippi high school football, college football, and the NFL.

1
Three weeks into its 8-man football era, Porter’s Chapel Academy’s offense seems to be enjoying the switch.
PCA set a single-game school record for points in its 70-6 drubbing of Discovery Christian on Friday, and is on pace to post its highest season point total in seven years.

The Eagles have scored 152 points in three games. They scored 217 all of last season, and have only surpassed the 200-point mark twice since 2014.

Although nearly every skill player on the roster has gotten a moment to shine — 10 different players have scored a touchdown so far — the biggest breakout star might be senior quarterback Jace Riggs.

Riggs threw three touchdown passes against Discovery Christian to bring his season total to seven. That matches his total from all of 2020. Riggs has also run for two touchdowns, and had a 100-yard rushing game in Week 2 against defending MAIS Class 2A champion Manchester Academy.

“Jace threw the ball really well for the third week in a row,” PCA coach Blake Purvis said after Friday’s win. “We missed a couple of deep balls. But he threw the deep ball well again, moved around and bought himself time when he needed to.”

PCA will go on the road for the third time in four weeks this Friday, when it plays its District 3-2A opener against Claiborne Academy.

2
One of the most highly-anticipated games of the 2021 Mississippi high school football season was just added to the schedule late last week.

Oak Grove is one of the most consistent teams in the MHSAA, with three straight appearances in the Class 6A title game and five in the past eight years.

Greenville Christian, meanwhile, emerged as an MAIS power last season when more than two dozen top players transferred from other Delta schools that canceled their seasons because of the COVID-19 pandemic. Greenville Christian won 11 straight games and the Class 3A title last season, and has already made a claim as the top overall team in the MAIS this year by knocking off Class 6A powers Madison-Ridgeland Academy and Jackson Prep.

3
LSU’s 38-27 loss to UCLA in Saturday’s season opener was noteworthy on a number of levels — none of them good for the Tigers.

The loss snapped a 12-game winning streak for LSU against current members of the Pac-12. Its last loss to a team from the western league was a 17-12 setback agaisnt Southern California in 1979 at Tiger Stadium.

LSU had beaten seven different Pac-12 schools during the streak, with the last being a 41-3 rout of Washington in 2012.

It also marked the first time in 26 years that LSU has lost its opener in consecutive seasons. The Tigers lost five in a row from 1991-95. They lost 44-34 to Mississippi State last season.

Lastly, LSU lost a true non-conference road game for the first time since its 2002 season opener at Virginia Tech. It had won seven straight games in non-conference opponents’ stadiums since then.

4
When a team from the lower-tier Football Championship Subdivision plays one from the Football Bowl Subdivision, it’s often for a paycheck and a bit of exposure.

A number of FCS teams did not get that memo in Week 1.

Six FCS teams visited their bigger FBS brethren and pulled off upsets, led by Montana stunning No. 20 Washington 13-7 on Saturday afternoon. That was the first victory for an FCS team over a ranked FBS team since North Dakota State’s win at No. 13 Iowa in 2016.

On Saturday night, Southeastern Conference cellar dweller Vanderbilt was drubbed 23-3 by East Tennessee State. It was ETSU’s first win over a Power 5 program in 34 years, and Vanderbilt was the first SEC team to lose to an FCS squad since South Carolina lost to The Citadel in 2015.

Northern Iowa took No. 7 Iowa State to the wire before losing 16-10, Oklahoma State struggled to beat Missouri State 23-16, Kansas needed a late touchdown to beat South Dakota 17-14, and Wyoming also scored a TD in the final minute to fend off Montana State 19-16.