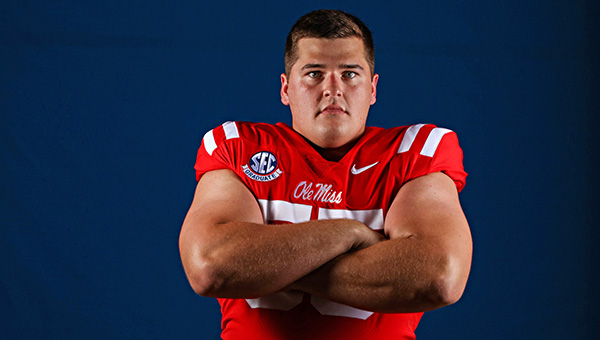 Editor’s note: This story appears in the 2021 edition of Playmakers, The Vicksburg Post’s football preview magazine. Copies of Playmakers are available at the newspaper’s office at 1106 Washington Street in Vicksburg.

Growing up, Ben Brown wanted nothing more than to be an Ole Miss football player.

Both grandfathers had been one. So had his dad and a few uncles. Ben, blessed with a big frame and a passion for the game, certainly had the potential to keep the family tradition going as he blossomed into a top flight recruit at St. Aloysius High School.

In 2018 Brown made the dream a reality and now, four years later, he’s become a stalwart in the lineup. He has started 34 consecutive games on the offensive line and is entering the 2021 season as an elder statesmen on one of the top offenses in the country.

“I would have always hoped to have played as many games as I did, but if I wouldn’t have I would have still been an Ole Miss Rebel football player and that’s always been a dream of mine so I’m glad I was able to live out my lifelong dream,” Brown said. “I’ve always wanted to be an Ole Miss Rebel and have the opportunity to rep the Red and Blue on Saturday nights in Oxford and other places in the SEC. That’s something I looked forward to since I was a little kid. Having that chance is unbelievable.”

Brown won the job as Ole Miss’ starting right guard as a freshman in preseason camp in 2018 and never left the lineup. He has started every game of his college career, and if he starts 13 more this year — 12 in the regular season plus a bowl game — he will become only the fifth player in Ole Miss history to start at least 47 career games.

“That doesn’t always happen for everyone that’s able to play college football,” Brown said. “I credit that to all peers and teammates for pushing me hard, my coaches for getting me ready, and I thank the Lord too for not having any serious injury that’s kept me out of any game and that I’ve been able to be the best version of Ben Brown for Ole Miss football. That’s all I want.”

Although Brown is a senior this season, he could conceivably break Tillman’s record in 2022. Because of the NCAA granting all players an extra year of eligibility for the COVID-19 pandemic in 2020, Brown still has two years of eligibility left.

A good showing this season, however, could make him an NFL prospect. Brown moved to center last season, played all but eight offensive snaps, and was the Rebels’ top-graded offensive lineman in pass protection in three of their 11 games. He moved back to guard this preseason after Utah transfer Orlando Umama joined the team, and will start there when the Rebels open the season Monday night against Louisville.

Brown has the kind of mobility and versatility NFL scouts covet in an interior lineman. He said it was way too early to think about next season, though, when this one seems so promising.

“I’m sure there’s some stuff out there, but I’m focused on 2021 Ole Miss football. That has got 100 percent of my attention. That is all I’m worried about, all I’m focused about,” he said.

Ole Miss is coming off a 5-5 season capped by a win over Indiana in the Outback Bowl. The Rebels ranked third in the country in total offense with 555.5 yards per game and 14th in scoring offense with 39.2 points per game. Two losses were decided in the last two minutes, and the Rebels were tied with eventual national champion Alabama in the fourth quarter before losing 63-48.

“I think we have a lot of potential. There were some games last year that were so close. People saw it and were, frankly, scared to play against Ole Miss football because we’re a different brand of football,” Brown said. “We challenge people. We put up a lot of points and our defense makes a lot of stops. I think people are now realizing that Ole Miss is on the rise and we’re going to stay on top.”

Brown is ready to do his part to get the Rebels there. He’ll once again play a key role in the middle of the offensive line, and perhaps an even bigger one as his experience and wisdom sends him into more of a leadership role.

Brown said he’s handling that adjustment by trying to lead by example.

“I would do everything in my own power to control what I can control, whether that’s showing up on time, lifting as hard as I can, practicing as hard as I can, being as coachable as possible, I was trying to control what I can control,” Brown said. “And since I’ve gotten a little bit older, I’ve been able to use my voice some and let guys know we have a standard at Ole Miss football. Every single Saturday, the entire world is going to be able to see what our standard is. I want some of these guys, especially younger guys, to know it’s tough getting to that standard and it’s not easy to keep up everyday. You have to be consistent with it.”

Over the course of his first three seasons, Brown has set a standard of excellence at Ole Miss. He was on the Southeastern Conference’s All-Freshman team in 2018, and the preseason watch list for the Rimington Award — given to the country’s top center — in 2020.

This season, he was selected third-team preseason All-SEC by the league’s media.

He’d love to add a few more accolades to those in 2021 but, most of all, he said he wants to “leave a legacy” in Oxford for winning and doing things the right way.

“It’s obviously a big year. But my biggest thing is, I want a legacy left behind at Ole Miss that I was a team player and I worked hard every single day and made guys better. That is how I want to be remembered at Ole Miss, and this is my last year to do it,” Brown said.

“It’s been a lifelong dream of mine. It’s a culmination of peewee football at 6 years old to 2020 Ole Miss football. This is what I’ve been working for my entire life,” he continued. “I do understand the weight of that. I try not to think of it in that context, but I do understand that there is a lot at stake for Ole Miss football this year and I’m going to enjoy every single bit while I can with my brothers and my coaches. I’m just soaking it up while I can.”