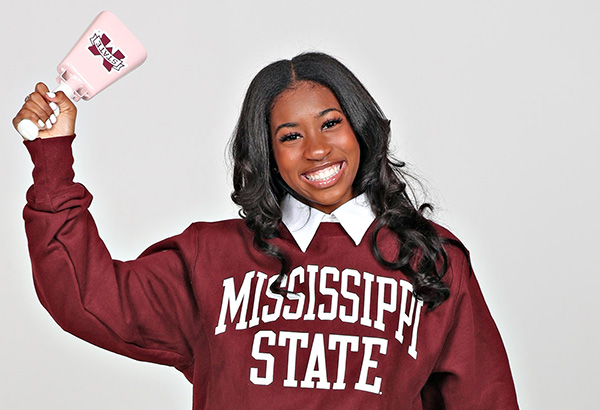 Vicksburg native Morgan Nelson, a 2021 Warren Central graduate, will be a member of the Mississippi State Pom Squad this football season. (Submitted to The Vicksburg Post)

Editor’s note: This story appears in the 2021 edition of Playmakers, The Vicksburg Post’s football preview magazine. Copies of Playmakers are available at the newspaper’s office at 1106 Washington Street in Vicksburg.

With cowbell in hand, Morgan Nelson is ready to cheer on the Mississippi State University Bulldogs.

But the 2021 Warren Central High School graduate will not be hanging out in the stands at Davis Wade Stadium. She’ll be on the sideline as a member of the MSU Pom Squad.

The Pom Squad is part of the MSU Spirit groups, which also includes the co-ed and all-female cheerleaders and the Bully mascot program.

“Ever since I made the decision to attend Mississippi State, my eyes were drawn to the dance team,” Nelson said. “Dance has always been my passion and after attending several clinics before tryouts, I knew this was for me.”

Nelson was among 37 young women who were vying for the 20-person Pom Squad.
Describing it as a “nerve wracking experience,” Nelson said the tryout was divided into three rounds — a virtual video audition, an interview and an in-person round.

“When we arrived in Starkville for the in-person round we had about three hours to learn all of the material and tryouts promptly began the following morning,” she said.
Although the tryout may have been stress provoking, with Nelson’s dance experience and leadership skills, muscle memory certainly aided her in making the team.

Throughout her high school years, Nelson was involved and affiliated with more than 15 organizations including the National Honor Society, Beta Club, Student Council and Key Club. She was a varsity football cheerleader, active in the WCHS choral department as a member of the Madrigal Choir and Total Sound, and was a Warren Central Student Ambassador.

Nelson also volunteered with Teens United, which is a program offered through the United Way of West Central Mississippi.

As for her dance ability, Nelson began her training at an early age at the Debra Franco Preparatory School of Dance.

“I have danced with Debra Franco School of Dance since I was 2 years old,” Nelson said. “I found a home away from home with Miss Debra, and I could never thank her enough for all that she has taught me throughout these years. Her training undoubtedly brought me to this team. I can easily say that I would not be here if it wasn’t for her. She always pushed me beyond where I thought I could be.”

In addition to her love of dance, Nelson said, she wanted to try out for the team with the goal of making new friends and with hopes the experience would become an avenue for her to continue serving in a leadership capacity.

“I tried out for the team because I wanted to continue dancing, meet many new friends, but most importantly, become a role model to our younger generation,” she said. “I want them to know that they can do anything they put their minds to if they always stay focused and never let up.”

MSU Pom Squad members are required to attend workout sessions along with their dance practices. Team members in the past have also performed at Mississippi State’s men’s and women’s basketball games at Humphrey Coliseum and baseball games at Dudy Noble Field.

The team has also been involved in community activities by making guest appearances and performing at Starkville’s downtown Pumpkinpalooza, which is held the day before MSU’s Maroon Madness basketball pep rally each October.

Nelson will get her first opportunity at performing during an MSU football game at Davis Wade Stadium when the Bulldogs take on Louisiana Tech on Sept. 4 for their season opener.

Nelson said she was aware of the MSU Pom Squad’s rigorous schedule but was up to the challenge and excited for the experience.

“There are extremely high expectations of a member of the MSU Dance Team, but I did not expect anything less, and I am immensely grateful and blessed to receive the opportunity to represent my school in such a grand fashion,” she said.

Nelson is not the only Vicksburg native who is affiliated with the MSU Pom Squad. Taylor Lee, who graduated from St. Aloysuis in 2015, is the squad’s dance coach.

“Coach Taylor Lee is a dynamic person and I have her to thank for this chance,” Nelson said. “She has been an amazing role model in every way in the short time that I have known her. I intend to always strive to be a great asset and team member.”