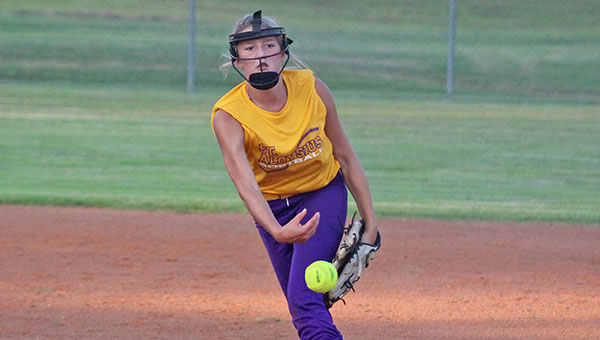 The hits just kept on coming for Cathedral, much to St. Aloysius’ dismay.

Lily Crum went 4-for-4 with two RBIs, KG Fisher had three hits, and Cathedral piled up 17 hits total in a 12-0 softball win over St. Al on Tuesday.

It was the first run-rule loss of the season for St. Al, which only had one hit of its own — a double by Lydia Nettles in the third inning. Crum struck out seven batters and walked one in a five-inning complete game.

“We just couldn’t follow through with the little things — routine plays, not taking pitches when we should have,” St. Al coach Savannah Buck said. “I think they were playing a little stiff, all around. Hopefully they come out (Wednesday) a little more loose and ready to play, and flush all these mistakes we had.”

Cathedral (15-2) started fast. Its first three batters singled, with Lauren Dunbar bringing in a run on the last hit. Crum and and Hargon Marlie added RBI singles later in the first inning to give the Green Wave a 3-0 lead.

Crum retired the first seven batters she faced, which gave Cathedral’s hitters enough time to break the game open. They scored eight runs on nine hits in the third inning to make it 11-0. Kinslee Young hit a two-run double, and Liza Gregg and Crum each brought in one run with doubles.

Marlie also had an RBI single in the third inning and finished 2-for-3 with three RBIs.

Cathedral added an unearned run in the top of the fifth inning and Crum retired the side in order in the bottom half to finish the game.

Tuesday’s game was the first of three in three days for St. Al. The Lady Flashes will travel to Copiah Academy for another district game Wednesday at 6 p.m., and then host Park Place Thursday at 6 p.m. at the Betty Hearn Softball Complex.

Emma Goss had two hits and two RBIs for Prairie View, and Anna Grace White hit an RBI double to drive in the go-ahead run in the third inning.