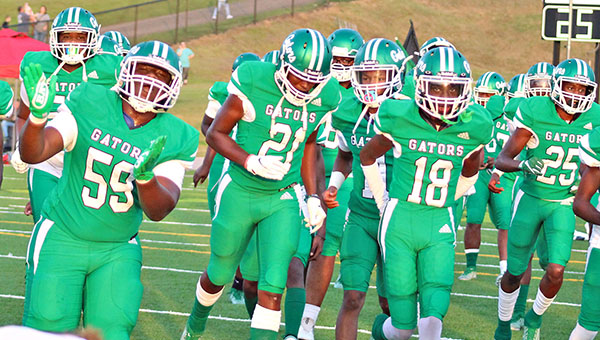 Vicksburg High football players run onto the field before the start of their game against Warren Central. (Ernest Bowker/The Vicksburg Post)

In the most visible way, the win-loss column, the first two weeks of the season have not gone Vicksburg High’s way.

The Gators had chances to win both of their games at home, but let them slip away and are now sitting at 0-2. That might be about the only thing they’re down on themselves about, however.

The Gators pushed a pair of potential Class 6A playoff teams, Germantown and Warren Central, to the limit. As they head into the MHSAA Region 2-5A opener Friday night at Canton, the hard-fought losses have them feeling prepared that they can weather anything that lays ahead of them.

We definitely want to start our second season off the right way. That’s what the preseason is for, is to prepare us for district,” Vicksburg coach Todd McDaniel said. “I just hope we come out with the same fight and the same hunger, the same grit. If we can do that, then our season is going to turn out the way we expected.”

One of the biggest factors in the Gators’ 0-2 start has been an inability to finish drives on offense.

They stalled out several times inside the 20-yard line in a 34-14 loss to Germantown, and also had an interception returned for a touchdown. Last week, a go-ahead touchdown was taken off the board against Warren Central because of a holding call late in the third quarter. That play came on fourth-and-18 from the WC 21-yard line, after a false start and fumble pushed them just outside of the red zone.

McDaniel tried to bite his tongue when talking about the penalty in the 7-6 loss to Warren Central, but gushed about his team’s overall effort. The Gators held WC to 184 yards of total offense and put up 190 of their own. Otis James rushed for 83 yards on 15 carries, and Alex Jefferson had 38 yards and a touchdown on six touches.

More importantly, the Gators showed a resilience that was often lacking in recent meetings with their crosstown rival.

This was their first meeting i since 2013 decided by less than 17 points. With a roster loaded with sophomores, McDaniel said it was a clear step in the right direction even if the outcome didn’t go their way.

“We’re going in the right direction. Anybody can see that if they want to see that,” McDaniel said. “So just continue to fight, work hard, continue to get better, and at the end of the year we’ll be looking to compete for the district championship and making a playoff run. Not just playing a game, but making a run.”

The biggest takeaway from the first two weeks, McDaniel added, was the Gators’ drive and willingness to stand up to adversity.

“That’s the biggest thing from last year to this year — we fight. We fought for 48 minutes and left it on the field. If you’re going to play football, those are the things you have to do in order to win,” he said. “We have to eliminate a few mental mistakes, but once we eliminate those and continue to fight everything is going to come out in our favor.”

With the two Class 6A opponents in the rear view mirror, the Gators can now turn their full attention to the heart of their schedule.

The region opener against Canton comes a couple weeks earlier than usual because the latest round of MHSAA realignment put nine teams instead of the usual eight in Region 2-5A. While most teams have an open date or a third non-region game this week, Vicksburg and Canton will play one that counts.

McDaniel said it’s thrown the normal flow of the season off a bit, but he and his team are adjusting.

“A lot of people had a week off or have a week off this week to get prepared for district play. That’s not happening this year,” McDaniel said. “You normally have a whole week to work on yourself, but you have to continue to game plan because you have a game Friday.”