Looking Back: Hook and Ladder Company No. 1 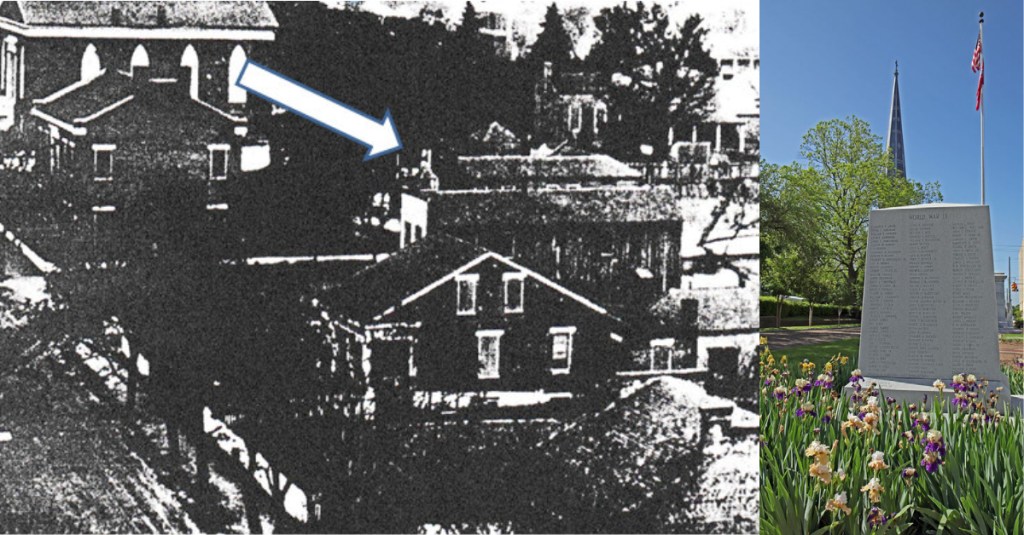 The volunteer Hook and Ladder Company No. 1 was organized in February 1867 and the firehouse stood in the middle of Monroe Street. Now, in its place is the city’s World War II memorial rose garden. (Photos submitted)

The volunteer Hook and Ladder Company No. 1 was organized in February 1867 and on Jan. 18, 1868, their hook and ladder truck was delivered and housed at M.H. Bigelow’s plaining mill.

Four days later on Jan. 22, the truck got its first trial at a fire on the corner of Levee and China Streets, a two-story house belonging to Mr. Podesta. On Jan. 30, the company asked the city board for a “truck” house, which was approved and was completed on Feb. 29 by M.H. Bigelow for $300.

The Vicksburg Herald reported that “the members of the Hook and Ladder Company had a general blow-out yesterday, upon the occupation of their new house, just built for them by the city authorities. We were not present, but understand there was a jolly time of it. Toasts were drunk and speeches made. Punch was in profusion, and a bottle of champagne broken over the roof of the building. The efficiency of this company is of a most excellent character, and we trust will always continue in a high state of usefulness.”

The Fire Committee report in the Herald stated a number of times in early 1878 that the house needed repairs and then in June that it was undergoing “reconstruction.” There appeared to be some conflict between the city and the company in January 1882 when the city demanded “their” horse back and that it be given to Constitution Fire Company. The Herald reported that the “members of the Hook and Ladder Company don’t much relish idea of losing their fine horse. They maintain that they have a considerable monied interest in the animal, and do not think the Board of Mayor and Aldermen should deprive them of their rights.”

In February 1882, the house again needed repairs and the company members asked citizens for money to make the repairs. The Vicksburg Herald reported that “the Hook and Ladder is a necessary adjunct to our splendid Fire Department, and its wants are so few they should be cheerfully supplied. The gallant boys who compose the Company charge nothing for their services, and the citizens can do no less than keep them furnished with accouterments and a secure place to keep them.”

They must have mended fences, because in June, the city advertised for two horses for the Hook and Ladder Company and then instead of opening the bids, they voted to give two horses that were used by the city for “street purposes” to the company.

In August, the company moved out of their house and into Phoenix Fire House, without the consent of the Fire Committee. The original house in the middle of Monroe Street was put up for sale in October and was demolished shortly thereafter. The location of the firehouse is the city’s memorial rose garden today.