Porter’s Chapel is scoring points at a record pace 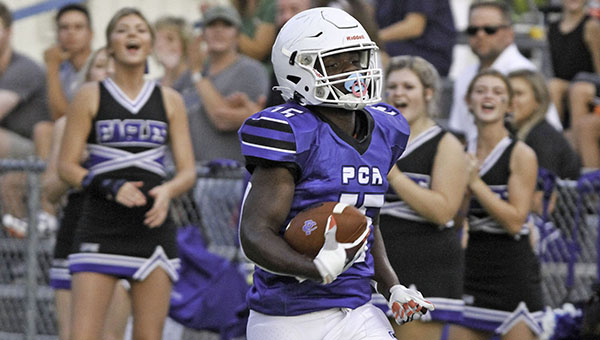 Porter's Chapel Academy running back Tyler Washington runs toward the end zone against Discovery Christian. Washington is one of 10 PCA players that has scored a touchdown in the first three games this season. (Paul Ingram/For The Vicksburg Post)

There were times, in the not-too-distant past, when it felt like Porter’s Chapel Academy could play a dozen quarters against an opponent and never sniff the end zone.

During a 24-game stretch that started late in the 2018 season and lasted through the end of 2020, PCA scored one touchdown or less in half of them. Eight of those were shutouts.

Thankfully, those days appear to be long gone. In only three games this season the Eagles have shaken off their anemic reputation and become an offensive juggernaut. Ten different players have scored a touchdown and the team is averaging 50.7 points per game. It’s a turnaround that has sparked PCA to a 2-1 start heading into Friday’s MAIS District 3-2A opener at Claiborne Academy.

“Obviously it’s a lot more fun when you score points,” PCA coach Blake Purvis said with a laugh. “The biggest difference is, we’re playing well up front. Our offensive line is giving us time to throw the ball when we want to throw it, they’re opening up holes when we want to run it. And then our athletes are making plays when they get the ball in their hands. We’re not turning it over. We’re taking advantage of every offensive possession and it’s leading to great production.”

PCA opened the season with a 48-0 rout of Kemper Academy, and last week set a single-game school record for points in a 70-6 victory over Discovery Christian. In between, they scored 34 against two-time defending Class 2A champion Manchester.

At its current pace, PCA will finish the 10-game regular season schedule with a little more than 500 points. The single-season school record is 462 points, set in 2008 when PCA reached the MAIS Class A semifinals and played 14 games.

Three players — quarterback Jace Riggs, running back Tyler Washington and wide receiver Willie Rogers — have been the team’s biggest playmakers, but not the only ones. Seven others have scored touchdowns, and five have 60 rushing yards or more.

PCA has run 102 offensive plays and scored 19 touchdowns — an average of one every 5.4 plays. The offense has been so explosive that Washington, the team’s leading rusher the past two seasons, has only carried the ball 11 times so far. He has 180 yards — an average of 16.4 per carry — and four touchdowns.

“Rotating that many guys obviously minimizes the risk of injury. Then, from an opponent’s perspective, it’s probably a lot harder to game plan,” Purvis said. “You can see from the film that Tyler, Jace and Willie are obviously big-time players for us. But then you also watch it and see that Tyler has two carries and John Wyatt (Massey) and Bridger (Jung) are rushing for touchdowns, and you see there are multiple guys you have to stop. The more of those guys we can get on the field, the more the defense has to account for because any one of them can make a play.”

Some of PCA’s turnaround can be attributed to its switch from 11-man to 8-man football this season. The biggest difference between the formats is the ability to get players into the open field in the latter, and with its speedy playmakers PCA is well-suited for it.

Purvis, though, said the Eagles are simply playing better in all facets.

“Some of it probably is 8-man. But you still have to block. You still have to execute whatever scheme you’re running. We’re still playing with eight, just like they are,” Purvis said. “Another large portion of it is we’re a better football team. We’re playing better. Our guys are playing unselfishly, and when you don’t care who’s carrying the ball or don’t mind blocking for the other guy because you know he’s going to do the same for you, that makes your whole offense better.”

Week 4 of the season brings PCA to its biggest game so far.

Claiborne is enjoying the same sort of remarkable turnaround as PCA. After going 3-7 last season, the Rebels are already 3-0 this year and have scored 64 points in each of their victories. They averaged 27.1 points per game in 2020.

“They are dangerous on offense. They have a lot of playmakers. They’ve got good offensive and defensive lines — they do well stopping the run and running the football. I think our line is going to be tested for sure this week,” Purvis said. “We’ve got to have a tough mental mindset. There’s some things stacked up against us, but this team is prepared for it. They’ve handled adversity as well as any team I’ve had. I believe they’ll be prepared. If we execute and play well, then good things will happen.”

Although it is only Week 4, Purvis added that this is a crucial game for his squad. There are only four teams in District 3-2A, so there is little to no margin for error for a PCA team with championship aspirations.

“In a three-team district, you can’t afford to stumble a game,” Purvis said. “I really believe the champion in our district is going to be a 3-0 team. Starting 1-0 will be a boost moving forward the next couple of weeks.”