Winless Flashes not frustrated yet 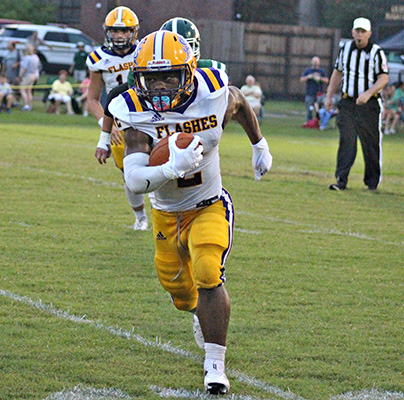 Through three weeks, St. Aloysius head coach Bubba Nettles says he loves what he’s seeing from his team. The Flashes have played hard and been competitive against a difficult schedule, and held leads late in the first half of the last two games.

Other than some self-satisfaction, though, they don’t have much to show for it.

St. Al has lost all three of its games so far, and as the Flashes head into Friday’s home contest against Brookhaven Academy they’re trying to figure out a way to sustain momentum and finally land in the win column.

“Outside of the zero wins, I am a pleased and very happy coach,” Nettles said. “Every team we’ve played has been a really good football team. These kids know that they are a good football team. We just have to find a way to get over that hump. That’s what we’re dealing with this week.”

St. Al’s problem the past two weeks has been sustaining momentum. It led Centreville Academy 21-14 late in the first half before beind outscored 28-6 over the last 26 minutes and losing 42-27.

Last week, the Flashes jumped out to a 13-0 lead in the first quarter against Riverfield and wound up losing 28-21. Nettles said figuring out how to close out games can only be learned by doing it.

“That’s just learning how to win,” he said. “These kids, unfortunately for them, have not had a lot of success in their entire high school career. Developing that foot is on the throat, we have to keep it on (attitude), that’s something you develop through winning.”

Until it happens, Nettles said he just wants the Flashes to keep doing what they’ve been doing. Even in a pair of two-touchdown losses to Park Place and Centreville, St. Al was competitive and not blown out. St. Al’s defense dominated Park Place in the second half, then it gave up two late, short-field touchdowns against Centreville that allowed the score to appear more lopsided than the game actually was.

“Our objective is, regardless of what the scoreboard says, the other team needs to know they were in a fight,” Nettles said. “I think we have achieved that as our goal. I don’t think anybody has walked away from us going, ‘Well, that was easy.’ That’s all I can ask. They keep doing that, and those W’s will come.”

In preparing for Brookhaven (2-1), Nettles has also looked to the Flashes’ recent past for inspiration.

The Cougars are a passing team like Park Place, but the last two opponents have been run-first teams. Nettles said he and his staff have gone to work this week correcting more of the defensive mistakes from Week 1 — Park Place passed for 151 yards and two touchdowns in the first half — than focusing on those that allowed Centreville and Riverfield to break off big plays in the running game.

“We’re going back to what we faced three weeks ago with Park Place — a big spread football team that likes to throw the football. All the stuff I wanted to correct from (Park Place) we corrected (Monday),” Nettles said. “We’re eager to get on the field Friday in front of God and everybody and show that we’ve corrected our problems.”