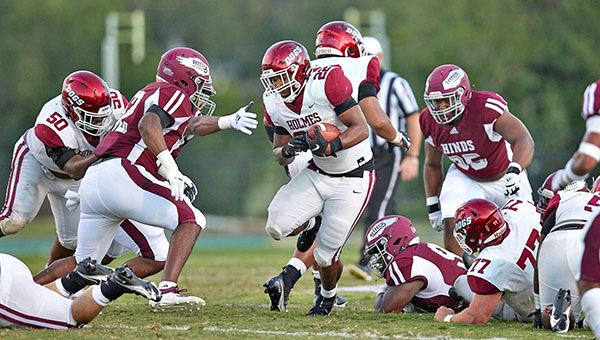 The biggest football game on Thursday’s schedule in the Mississippi Association of Community Colleges Conference did not quite live up to the hype.

No. 15 Jones College scored on the game’s opening possession and never looked back, as it piled up 449 yards of total offense and routed No. 2 Northwest Mississippi 31-9 in an early-season showdown of nationally-ranked teams.

Jones quarterback Quaterius Hawkins completed 20 of 28 passes for 260 yards and two touchdowns, including a 17-yard score to Bud Tolbert to open the game. Tolbert caight seven passes for 82 yards and one touchdown, and Qua Sanders had five receptions for 94 yards and a TD.

La’Damian Webb carried the ball 27 times for 161 yards and two touchdowns for Jones.

Northwest’s Michael Hiers threw a 66-yard touchdown pass to Keyon Fordham to pull the Rangers to within 17-9 early in the fourth quarter. Jones responded with a 10-yard touchdown pass from Hawkins to Sanders, however, and Webb broke off a 61-yard TD run with 3:10 remaining to cap the victory.

Hiers was 17-of-33 passing for 219 yards, with the one touchdown. Fordham caught three passes for 124 yards.

McCray completed 15 of 21 passes for 217 yards, with touchdowns of 22 yards to Tabashi Thomas and 46 yards to Kaleb Mosley. He also ran for touchdowns covering 9, 8 and 12 yards.

McCray’s 9-yard TD run with 1:11 left in the first quarter gave Hinds the lead for good, and his TD pass to Thomas made it 21-7 with 5:54 left in the second quarter. The long touchdown pass to Mosley gave the Eagles a 28-14 lead with 9:50 to go in the third quarter, and Holmes never got it back to a one-score game.

Jamarian Samuels had 55 yards and a touchdown on eight carries for Hinds (1-1). Linebacker Malik Sims, a former Warren Central star, had a team-high eight tackles.

Wasson also had a 40-yard field goal in the first quarter and a 35-yarder midway through the fourth to help the Bulldogs win a defensive battle. Neither team had more than 250 yards of total offense, Gulf Coast recorded a safety in the first half, and Northeast’s only touchdown came on a 16-yard interception return by Scott Norphlet.

Northeast committed three turnovers, while Gulf Coast had four to go along with 11 penalties for 165 yards.

Chris Howard caught 11 passes for 128 yards and a touchdown for Itawamba, and Shamar Sandgren caught nine fo 116 yards and a TD.

Pearl River 24, Coahoma 14
Pearl River rushed for 194 yards as a team, Bryan Whitehead returned a fumble 55 yards for a touchdown, and the Wildcats knocked off Coahoma Community College (1-1).

Jalon Jones was 16-of-34 passing for 259 yards and a touchdown for Mississippi Delta, and Lorenzo Perez caught five balls for 146 yards and a TD. Jones and Perez hooked up for an 85-yard touchdown on the Trojans’ first play of the game.

East Central quarterback Caleb Parten was 20-of-25 for 214 yards and two touchdowns. Parten’s 20 completions were the most for an ECCC quarterback since 2017.

Caldwell’s game-winning field goal capped a 10-play drive that took just over five minutes off the clock, and came on his third try. His first, from 30 yards, was good but was negated by a false start penalty on Mississippi Delta. East Central then blocked a 35-yard attempt, but the Warriors were penalized for being offsides. Finally, Caldwell kicked again from 30 yards and was good to give the Trojans the lead.

East Mississippi has outscored Southwest 298-47 in five meetings since 2012.