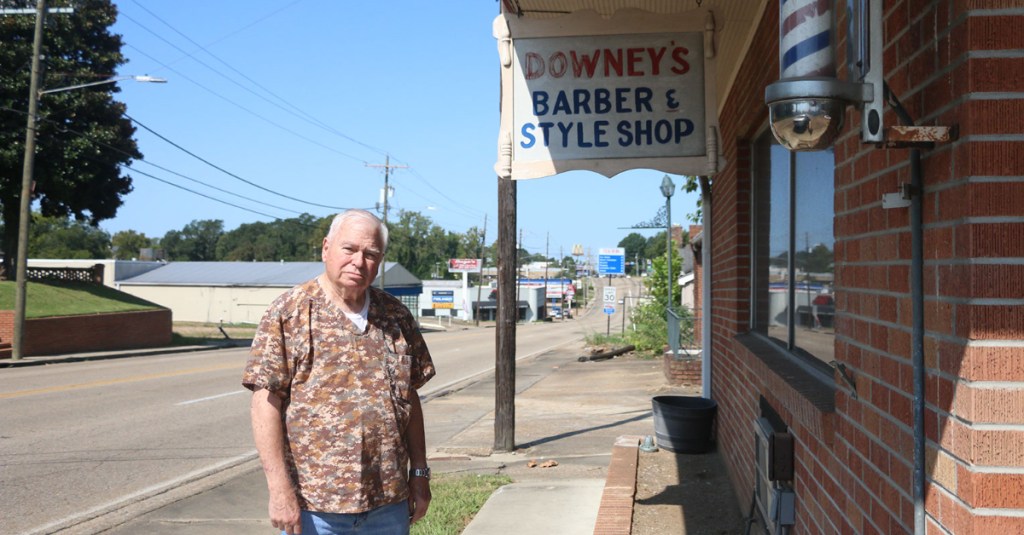 Bill Downey poses for a picture in his barbershop, Downey's Barber & Style Shop. Downey has been in business for 60 years. (Photo by Terri Cowart Frazier)

When Bill Downey opened his barbershop on Clay Street, he gave men haircuts and shaves.

This year will mark Downey’s 60th year of being a shop owner, and he is still giving haircuts and before the pandemic, shaves. When he started out, Downey said, he did mostly flat tops and regular haircuts.

And today, he said, “I do regular haircuts and flat tops,” he laughed.

“When I first moved out here (Clay Street), people said I was living in the country. The city bus even turned around here in the parking lot,” Downey said.

Since then, Clay Street has grown, as has the rest of Vicksburg north of downtown.

Downey said he was “17 or 18 years old” when he made the decision to go into barbering, and it was his late cousin, Bill Clark, who was also a barber, who suggested the idea.

“I went to Hinds Junior College and did 1,500 hours of school,” Downey said.

After finishing school, he went to work with barber Dan Butler.

Downey said he didn’t have a specific reason as to why he decided to start his own business.

“The opportunity just arose, and I latched on to it,” he said.

Since opening, Downey’s Barber & Style Shop has had a regular clientele and it has remained a gathering place for men to come and jaw.

Meeting people and conversing, Downey said, is what he likes best about barbering.

“I like meeting new people and different families, and everybody has a different story or different tale. Every customer is different no matter, what,” he said.

Downey admitted there have been times when he has had an unruly young client to contend with, making his job a challenge. But then again, he said, he has also had a few testy older customers sit in his chair.

“You’ve got some adults that are kind of grumpy. Thank goodness there are not that many of them anymore,” he said.

There was a time when Downey would cut a female’s hair, but not anymore. He just sticks with his tried and true, he said — flat tops and regular haircuts.