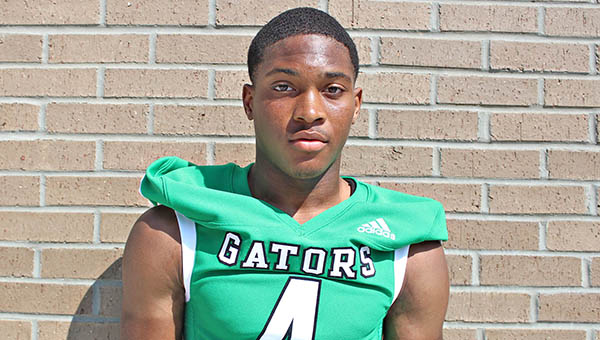 Vicksburg High running back Alex Jefferson scored a touchdown in a 45-0 win over Canton on Friday.

The Vicksburg Gators took out two weeks worth of frustration on Friday night, and Canton was the unfortunate recipient.

Five running backs scored touchdowns as the Gators broke into the win column for the first time this season by hammering Canton 45-0 in their MHSAA Region 2-5A opener.

Running backs Alex Jefferson, Otis James, Johnny Smith, Collin Johnson and JaMichael Adams all found the end zone for the Gators (1-2, 1-0 MHSAA Region 2-5A), who won their region opener for the first time since 2013.

Trinity McGloster, a girls’ soccer player who joined the team this week, kicked a PAT.

The Gators had scored a total of 20 points in hard-fought losses to Class 6A programs Germantown and Warren Central in their first two games. They surpassed that in the first half alone Friday, jumping on Canton for a 26-0 lead at halftime.

They added three more touchdowns in the second half, and also finished their first shutout in four years. The last time Vicksburg shut out an opponent was Sept. 29, 2017, in a 23-0 victory against Neshoba Central.

“We got a lot of guys involved. We ran the ball by committee tonight. The offensive line did a great job. Our defense did a hell of a job by keeping them out of the end zone. Big kudos to those guys for playing their behinds off for 48 minutes,” McDaniel said.

Mostly, McDaniel added, it was good to get a victory. The Gators were competitive in each of their two losses, but let the Germantown game get away in the second half and then couldn’t put away Warren Central in a 7-6 loss. On Friday, they kept their foot on the gas the whole way.

“It was a team effort by players, coaches and trainers. For them to go up there after a tough, heartbreaking loss last week and put it all back together to get a win in our conference meant a lot to the program,” McDaniel said. “I’m just elated by the guys coming out and strapping it back on at a high intensity. That’s the mark of a champion, is for the guys to play at the same intensity for the last three weeks and get better.”