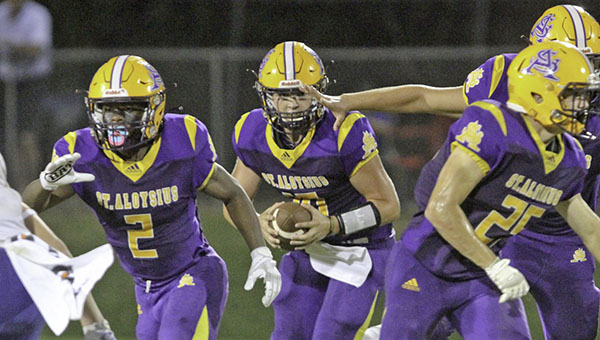 For 3 1/2 quarters, it looked like St. Aloysius would finally switch over from moral victories to the real thing.

Then a bad break and a bad decision left the Flashes on the wrong side of the scoreboard yet again.

Trevor Fortenberry caught a deflected pass in the back of the end zone for the tying touchdown, then returned an interception for the go-ahead touchdown two plays later as Brookhaven Academy scored twice in 69 seconds midway through the fourth quarter to beat St. Al 33-27 on Friday.

“The game plan was executed perfectly until about the last three minutes. Then it went to hell in a handbasket,” St. Al coach Bubba Nettles said.

St. Al dropped its record to 0-4, despite holding leads in the second half of its last three games and outplaying Brookhaven for most of Friday’s contest. It outgained Brookhaven 364 yards to 281, held the ball for most of the third quarter, and went toe-to-toe in an offensive shootout in the first half.

It was little consolation for Nettles.

“This sucks. I’m tired of sugarcoating it. It sucks,” Nettles said. “We’ve got to stop shooting ourselves in the foot. I take full responsibility. We’ll fix it.”

Most of the game’s offense came in the first half. Brookhaven quarterback Tyler Fortenberry threw a 69-yard touchdown pass to Logan Alexander on the first play from scrimmage, and St. Al answered with a 32-yard TD run by Padre Gray on its first play.

Tyler Fortenberry kept Brookhaven in it by running for two touchdowns in the first half, and when the dust settled St. Al took a 27-20 lead into halftime.

In the third quarter, St. Al held the ball for 8 1/2 minutes on a 16-play drive that started at its own 22-yard line. Wilbanks was stopped a yard short on fourth-and-3 from the Brookhaven 18, however, and the long march netted no points.

“It hurt pretty bad. I looked up and realized we had had the ball almost the entire third quarter, which is what I want. And then to not punch it in flat-out sucks,” Nettles said.

Brookhaven took over on downs at that point and embarked on a long drive of its own. It went 84 yards in 14 plays and a little over five minutes to tie the score on a 4-yard pass from Fortenberry to Fortenberry. The ball tipped off the hands of another Brookhaven receiver at the goal line, and into the hands of Trevor Fortenberry who was in the pattern along the end line. Trevor Fortenberry tapped his feet just in bounds and Corey Case added the PAT to make it 27-27.

“We feel like we’re snakebit,” Nettles said. “Perfect coverage, they tipped it in the air, two guys running in the back, they caught it. It was their night and not ours.”

St. Al still had plenty of time — nearly seven minutes — and a short field to work with, after Gray’s 48-yard kickoff return set them up at the Brookhaven 42. After a six-yard loss on first down, however,

Wilbanks rolled to his left on the next play and overthrew his receiver.

Trevor Fortenberry picked off the floater, got to the sideline and then fought his way past a couple of would-be tacklers. He wound up going 61 yards to the end zone to give the Cougars a 33-27 lead with 5:41 left. The PAT was no good.

Wilbanks finished 9-of-19 passing for 175 yards and two touchdowns and added a rushing TD. Nettles said his quarterback simply tried to do too much on that one play, though.

“He should have tucked it and ran it. He tried to do too much when he doesn’t have to. He plays his heart out for us, but he’s got to tuck it and run it,” Nettles said.

St. Al got the ball back twice in the last five minutes but couldn’t pick itself off the mat. One drive resulted in a punt, and the other stalled at the Brookhaven 40. After Wilbanks completed a pass to Tucker for a first down, the Flashes were penalized for a false start, Wilbanks took a sack, and then Gray fumbled a pitch in the backfield with 10 seconds left.

Brookhaven recovered the fumble and took a knee to run out the clock.

Gray finished with 126 yards and a touchdown for St. Al, and Tucker caught five passes for 123 yards and two TDs.

“It’s deflating. We’re trying to develop the killer mentality in them. They fight so hard, and then something like that happens that just deflates them,” Nettles said. “They have to learn to bounce back from that, because they’re tired of it just as I’m tired of it.”

St. Al won’t have long to develop its killer instinct. It travels to Natchez next week to face Adams County Christian School in an MAIS District 3-4A game. ACCS (3-1) has played for a state championship two of the last three seasons.

“We have a tall task ahead of us next week, so we better come prepared or it could get out of hand,” nettles said. “They can be beaten. We can absolutely do it. They just have to believe that they’re the ones to do it.”