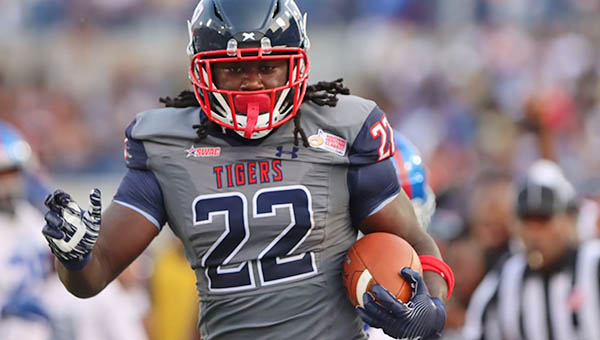 Jackson State running back Peytton Pickett (22) carries the ball Saturday against Tennessee State. Pickett ran for 55 yards and a touchdown to help JSU to a 38-16 victory. (Jackson State Athletics)

LORMAN — Alcorn State returned home, and to the win column, on Saturday night.

Felix Harper scored on a 1-yard plunge to cap a 10-play, 92-yard fourth-quarter drive, and Alcorn rallied late to knock off Northwestern State in its home opener

The Braves’ game-winning drive included a 50-yard completion on third-and-10 from Harper to Manny Jones to the Northwestern State 4-yard line. Harper ran it in on third-and-goal with 4:11 to play.

Before the game-winning drive, Alcorn had managed only a pair of field goals by Cristofer Thompson. He kicked a 40-yard field goal in the first half, and a 24-yarder in the opening minute of the fourth quarter that made it 10-6.

Northwestern State (0-2) scored on Kaleb Fletcher’s 18-yard scoring strike to Kendrick Price to take a 7-3 lead into halftime. The Demons stretched their lead to 10-3 after three quarters on Eddie Godina’s 37-yard field goal.

Harper completed 13 of 23 passes for 204 yards and ran for 27 on nine carries. Malcolm Magee picked off Fletcher with a minnute left to end Northwestern State’s final drive.

Fletcher was 22-of-31 passing for 192 yards with the one interception. The Demons rushed for only 71 yards on 36 carries.

Sanders completed 30 of 40 passes as Jackson State (2-0) used a pair of third quarter scores to build its lead. The freshman connected with Keith Corbin III for a 67-yard touchdown and then a 10-yard scoring toss to Shane Hooks.

An 81-yard punt return by Warren Newman in the fourth quarter added to Jackson State’s lead.
Sanders spread around his passing, connecting with nine receivers. He finished with the highest number of completions in the history of the Southern Heritage Classic, and his 362 yards was the third-highest.

The game marked the 29th time the two schools faced each other in the Southern Heritage Classic held at Liberty Bowl Memorial Stadium.

Shegog completed 16 of 33 passes for 272 yards, and added a team-high 88 rushing yards on 10 carries. He threw a 10-yard touchdown pass to Tyler Kennedy and a 65-yard TD to Dohnte Meyers in the last five minutes of the first half to rally the Statesmen from a 10-point deficit to a 21-17 halftime lead.

Shegog threw a 15-yard TD pass to Rico Owens on the opening possession of the second half as Delta State started to pull away. It scored 38 unanswered points after falling behind 17-7 early in the second quarter.

Southwestern U. 34, Belhaven 27
Landry Gilpin threw two touchdown passes and ran for 112 yards and a touchdown to lead Southwestern University (1-1) to a win over Belhaven (1-1).

Gilpin ran for a 13-yard touchdown early in the third quarter, and with five minutes left Southwestern blocked a punt that it recovered in the end zone for another touchdown. The two scores put Southwestern ahead 28-14 and gave it the separation it needed to win a back-and-forth game.

Belhaven quarterback Mayowa Asagunla ran for 87 yards and three touchdowns, and was 16-of-28 passing for 155 yards. Brad Foley had 105 total yards and one touchdown.