Southern Miss cruises past Grambling for first win of season 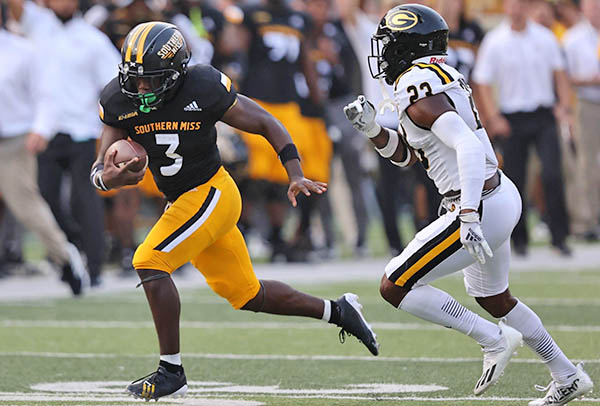 HATTIESBURG — In the wake of a humbling and lopsided season-opening loss, first-year head coach Will Hall said he felt like “the biggest fraud in 50 years” at Southern Miss.

After Saturday’s loss, he’s a little closer to the truth.

Frank Gore Jr. ran for 162 yards and a touchdown and Southern Miss pulled away in the second half as it breezed to a 37-0 victory over FCS member Grambling State on Saturday.

Southern Miss (1-1) scored 27 points in the second half as it rebounded from a 31-7 loss to South Alabama in its season opener.

“It was good, we really worked hard this week and had to really bounce back from last week. We already had a goal on our mind that we had to shut them out,” said Southern Miss linebacker Josh Carr Jr., who had four tackles and 1 1/2 sacks. “Praise to (Grambling), they really fought the whole four quarters. We just had to get in our mind like, ‘it’s time to bring the tradition back.’”

Although the Golden Eagles notched their first win of the season, it came with a cost. Starting quarterback Trey Lowe III left with what Hall called “a lower extremity injury” and did not play in the second half. Lowe’s status for next week’s home game against Troy was not immediately known.

Lowe was 10-of-13 passing for 99 yards and one touchdown before exiting. His backup, Ty Keyes, completed 4 of 11 passes for 50 yards and a touchdown, and also ran for 56 yards on eight carries.

Southern Miss used a 12-yard TD toss from Lowe to Jason Brownlee to grab a 7-0 first-quarter lead and stretched its advantage to 10-0 on Briggs Bourgeois’ 40-yard field goal in the second quarter.

Gore raced 51 yards for a score midway through the third quarter to put Southern Miss up 17-0. From there Bourgeois kicked two field goals, Dajon Richard scored on a 27-yard run and Keyes got in on the act with an 11-yard TD pass to Jakarius Caston to cap the scoring.

The Golden Eagles finished with 290 rushing yards — Richard had 76 yards, in addition to Gore’s big night — and 439 yards of total offense, but Hall felt they could have been better.

Aldon Clark and Elijah Walker combined to complete 16 of 32 passes for 90 yards for Grambling. The Tigers managed just nine first downs and 152 yards of offense.

“I thought we played decent for a half,” Grambling coach Broderick Fobbs said. “Defensively we played decently for a half. We did a really good job at stopping the run early. I think they wore us down later on in the game. We didn’t do enough offensively and didn’t score any points. We have be able to score points, have to be able to get the ball to our players and we didn’t do that today.”