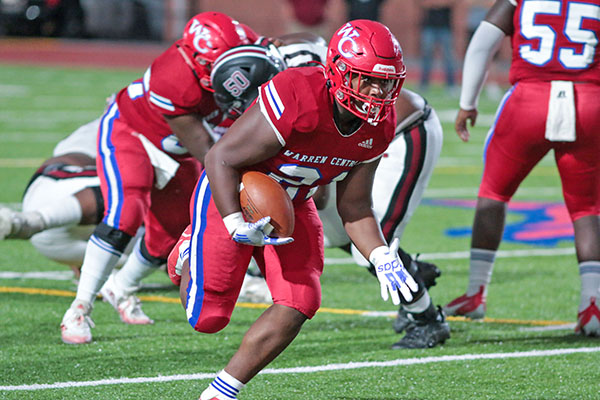 Warren Central's Mark Gray (21) carries the ball in Friday's game against Germantown. Gray scored one touchdown to help the Vikings to a 27-24 victory. (Walter Frazier/For The Vicksburg Post)

Warren Central should win a lot of games this season. Few will be as memorable as this one.

Jack Wright threw a 7-yard touchdown pass to Trey Hall with one second left on the clock to cap a wild back-and-forth fourth quarter and give the Vikings a 27-24 victory over Germantown on Friday.

The final touchdown capped the Vikings’ comeback from a 12-point deficit, and was the last of three lead changes in the final 3 1/2 minutes of the fourth quarter.

“I haven’t been part of many like that,” Warren Central coach Josh Morgan said. “We had a good crowd and didn’t give them much to cheer about in the first half. They got going and willed us to victory. We kept responding. We kept picking each other up and playing good team ball in all three phases.”

Warren Central (3-0) trailed 17-5 entering the fourth quarter, but rallied to take the lead on a 5-yard touchdown pass from Hartley Sullivan to Hall, and a 14-yard run by Mark Gray.

Germantown answered with an 85-yard touchdown pass from Jackson Hood to Tony Knight Jr. on a second-and-32 play with about three minutes to go, giving the Mavericks a 24-20 lead. It was the second long touchdown pass for Hood, who threw an 84-yarder to Tykown Wade early in the second half.

Warren Central did not wilt, however. With the backup quarterback Wright in the game, they steadily marched down the field in the two-minute drill. Wright found Preston Lynch for several big plays to keep the chains moving and the Vikings wound up inside the 10-yard line in the final seconds.

“It was exciting. It was a lot of plays being made, and I thought we handled the pressure and the heat of the moment well,” Morgan said.

The go-ahead touchdown came on fourth-and-goal from the 7. Hall came in motion and ran a wheel route to the left corner of the end zone, and Wright threw a perfect strike to him. Morgan said the play was designed to beat Germantown’s man-to-man coverage, and did exactly that.

“It was a man-beater. We knew what they were going to be in and we called Trey’s number,” Morgan said. “Coach Rob (Morgan, WC’s offensive coordinator) did a wonderful job dialing up plays all night. Jack made a great throw and Trey made a great catch.”

The thrilling fourth quarter and finish, Morgan added, helped to hide an otherwise so-so performance by the Vikings. Their only scoring in the first three quarters came on a Brandon Gilliam field goal in the first half, and a safety in the third quarter after Germantown (2-1) was pinned at its own 1-yard line following a punt.

They’ll have to make some improvements before defending MHSAA Class 6A champion Oak Grove comes to town in two weeks for the Region 3-6A opener, but it’ll be easier to learn following a win, Morgan said.

“We’ve got to learn to play and do better. I’m disappointed in how we started the game off. We were lethargic the entire first half. There’s a lot of learning we have to do,” Morgan said. “But on the other side, I’m very proud of them. If there’s a way for a coach to be disappointed and proud at the same time, I’m it. Any time you get to experience that, it helps your team moving forward.”