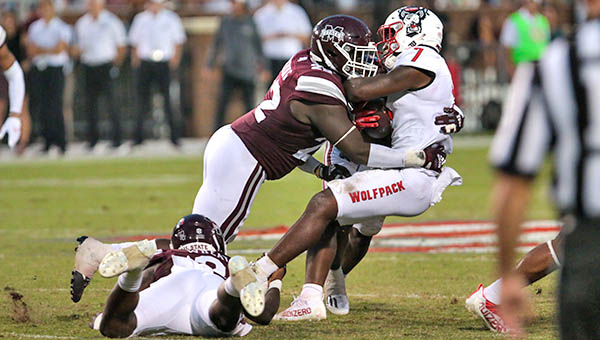 On Saturday against North Carolina State, Griffin made his presence felt a whole lot faster.

The sophomore took the opening kickoff back for a 100-yard touchdown, and Mississippi State’s defense cracked down from there en route to a 24-10 win over North Carolina State at Davis Wade Stadium.

“He can take it home any second,” running back Dillon Johnson said of Griffin. “Any time he touches the ball, he’s a home run hitter.”

After Griffin’s kick return gave them a 7-0 lead 13 seconds into the contest, the Bulldogs (2-0) held the Wolfpack (1-1) to 4.5 yards per play — with most of the damage coming in garbage time. Defensive coordinator Zach Arnett’s unit held running backs Zonovan Knight and Ricky Person to 50 yards on 16 carries, while quarterback Devin Leary went 30-of-49 passing for 303 yards.

North Carolina State scored its only touchdown with 1:06 remaining on a 4-yard pass from Leary to Thayer Thomas.

“We’ve got some dogs on defense,” Bulldogs safety Jalen Green said. “We played with a lot of swag and confidence. We’ve got a lot to show.”

Quarterback Will Rogers was 33-of-49 passing for 294 yards and two touchdowns for Mississippi State. Malik Heath and Jaden Walley each caught scoring passes from the sophomore.

“I thought he improved in the pocket this week,” Bulldogs coach Mike Leach said of Rogers. “I thought he took command of the offense and was kind of able to keep the energy going throughout the game.”

The Wolfpack missed their only chance for a tying touchdown in the first quarter when Green picked off a jump pass from Person in the end zone on third-and-goal.

North Carolina State made a field goal early in the second quarter before the Bulldogs extended their lead to 14-3 on a 21-yard touchdown from Rogers to Heath with 1:09 remaining. The senior receiver made a tough grab in the back left corner of the end zone.

“He executed that in a contested part of the game against one of the ACC’s more respected corners,” Leach said. “I go whole practices and don’t see as good a technique as he had on that play. We need him to do it all the time.”

Johnson put a fumble against Louisiana Tech behind him to have a big game for the Bulldogs against North Carolina State.

The sophomore was his team’s leading rusher with 18 yards and its leading receiver with six catches for 70 yards. He had a big diving grab in the first quarter and led the Bulldogs on a night in which they had 22 rushing yards on 15 carries.

“Last week, I got my confidence kind of taken for a second,” Johnson said. “I had to let people know I’ve got to bounce back, man.”