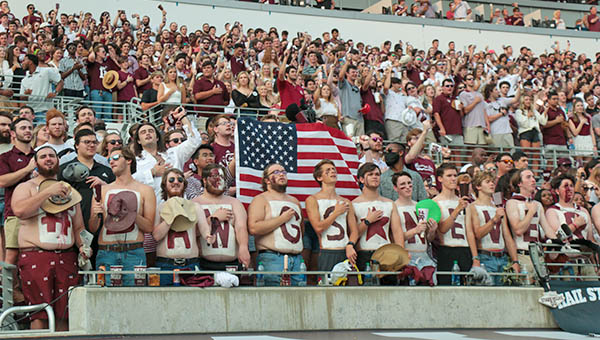 “Are you crying?” my friend asked, with a bit of mockery in his voice.

Given the setting and trying to maintain a macho appearance, I told him no even as my eyes welled up, my voice cracked and I wiped a bit of moisture out of my left eye.

I might not have been outright bawling, but of course I was a little misty-eyed. It was Dec. 1, 2001, and I was in LSU’s Tiger Stadium for the home team’s game against Auburn. It was a moment I had been looking forward to for a long time.

LSU had a chance to win the SEC West Division championship for the first time — and they did — but that wasn’t why it was so dusty in that part of the stands. That had more to do with this being my first game there since the 9/11 terrorist attacks three months earlier.

At LSU, as at many college stadiums around the country, the band starts playing the National Anthem but somewhere in the middle the crowd often takes it upon themselves to finish it. For months, ever since our country had been attacked, hurt and humbled, and as we slowly got back to our feet, I had wanted to experience that moment of 92,000 people joining in one voice.

When it finally hit, I was torn between joining in and just listening to it. I might have added a few off-key notes, but the sound of so many people spontaneously singing along was too beautiful not to enjoy.

I’ve been reminded of that moment a lot this week, as the 2021 college football season got under way. The one-two-three punch of recent events in Afghanistan, the 20th anniversary of 9/11, and the ongoing COVID-19 pandemic have once again dealt our nation a blow, but last weekend crowds returned en masse for the first time in two years and embraced the moment like we did 20 years ago.

Video clips of crowds singing “Mr. Brightside” at Michigan, “Jump Around” at Wisconsin, and the Florida State war chant in Tallahassee filled the internet. They were moments we took for granted in the past, but have badly missed — and needed — after a traumatic 18 months of lockdowns and restrictions.

Last Saturday’s sing-a-longs, just like those in 2001, were simple acts of defiance. Not necessarily against any government restrictions or acts, but simply against the bad hands that life deals us occasionally. They were a reminder that we’re all in this together, and when things get bad we still share a common desire for something unifying and normal.

It’s a beautiful thing to see and experience. I’m not sure when I’ll get to experience it again. I don’t get to nearly as many college football games as I used to in my younger days. But when I do, I will definitely sing along and maybe shed a tear. This time, I won’t try to hide it, either.