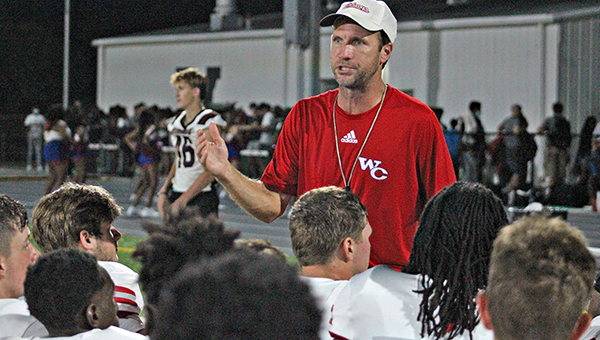 Warren Central head coach Josh Morgan talks to his team after their victory over Forest Hill in the Red Carpet Bowl. Morgan won his 76th game as WC's coach Friday against Germantown, moving him into a tie for fifth place on Warren County's all-time list. (Ernest Bowker/The Vicksburg Post)

1
One of Mississippi’s longest active winning streaks came to an end Friday, and it was bookended by the same team.

Tallulah Academy beat Manchester Academy 46-30 to snap the Mavericks’ 28-game winning streak.
Manchester won two MAIS Class 2A championships since its last loss, which also came at the hands of Tallulah. The Trojans beat Manchester 40-34 in the 2018 8-Man championship game, before the MAIS split its 8-man division into two classifications.

Those are the only two losses Manchester has had in three-plus seasons of 8-man football.

“We deserved to be the one to beat them,” Tallulah coach Bart Wood joked. “It’s like we’re playing ourselves. We play the same style of football. Same formations, same offense and defense. It’s crazy how much we’re alike. It’s fun for us to play each other, because it’s a hard-nosed football game.” 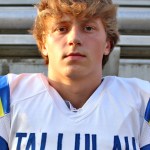 Besides the prestige of knocking off the two-time defending Class 2A champs, the win was a welcome one for Tallulah. It has endured a string of injuries that contributed to a 2-2 start. Wood said five players missed Friday’s game.

Running back Paul Michael Machen was a difference-maker, though. He rushed for 225 yards and two touchdowns — both in the fourth quarter — to lead the Trojans to victory.

Machen scored on runs of 24 and 53 yards, and Johnson Zheng returned an interception 65 yards for a TD, as Tallulah scored 22 points in the final period.

Machen had his third 100-yard rushing game of the season.

Quarterback Dee Morgan also threw a 72-yard touchdown pass and ran for 80 yards and two touchdowns. Wyatt Bedgood led the defensive effort with 14 total tackles and one sack. Zheng had four tackles in addition to his pick-six.

“With the two losses we had earlier, I thought we beat ourselves. We outplayed both teams and beat ourselves with turnovers and mistakes,” Wood said. “I got to practice (last) Monday and it was a different air about our boys. I felt like we could win this game because of the way they were practicing.”

Tallulah will play Prentiss Christian this Friday for homecoming.

2
Warren Central earned a thrilling come-from-behind, 27-24 victory over Germantown on Friday with a last-second touchdown pass from Jack Wright to Trey Hall.

It sent the Vikings into their bye week with a 3-0 record, and was a milestone win for head coach Josh Morgan.

Morgan, who is in his 12th season on Highway 27, improved his career record to 76-57. That ties former St. Aloysius coach Joe Edwards for fifth-most wins all-time among Warren County’s head coaches.

Edwards had a 76-37 record for St. Al from 1978-87, and Morgan is now 76-57 during his tenure at Warren Central. Since going 3-19 in his first two years, however, Morgan has a .657 winning percentage and the Vikings have reached the MHSAA Class 6A playoffs in nine consecutive seasons.

Warren Central has an open date this week before hosting defending MHSAA Class 6A champion Oak Grove on Sept. 24.

3
Ole Miss’ defense earned its share of vitriol in 2020, and is still only ranked No. 70 in the country in yards allowed through two games.

No one in Oxford is complaining right now, though.

Ole Miss allowed 34 points combined in the second half of the two games, after both were well in hand.

“I think they played really good in the first half of the first game and then they were up and down today not just in stats. More yards, but you know you got a lot of pass interference in there too. We’ve got to play better on the edges,” Ole Miss head coach Lane Kiffin said.

The Rebels also turned their defense into offense in Saturday’s 54-17 rout of Austin Peay. They recorded a safety for the first time since 2017, and defensive lineman Sam Williams scored on a 33-yard fumble return in the first quarter.

Williams finished with five tackles, two sacks and two forced fumbles in the game. Ole Miss had five sacks as a team.

4
In the opening moments of Saturday’s game against North Carolina State, Lideatrick Griffin did something few other Mississippi State players have ever done.

Griffin took the opening kickoff 100 yards for a touchdown to set the tone in a 24-10 Bulldogs’ victory. It was only the fifth kickoff return of 100 yards or more in MSU history, and the team’s first kickoff return of any length since Brandon Holloway went 100 yards againt Southern Miss in the 2015 season opener.

Griffin also has had more than 100 kick return yards in three consecutive games. Before he did it in the 2020 Armed Forces Bowl against Tulsa, the last Bulldog to accomplish the feat was Keith Mixon vs. Arkansas in 2016.