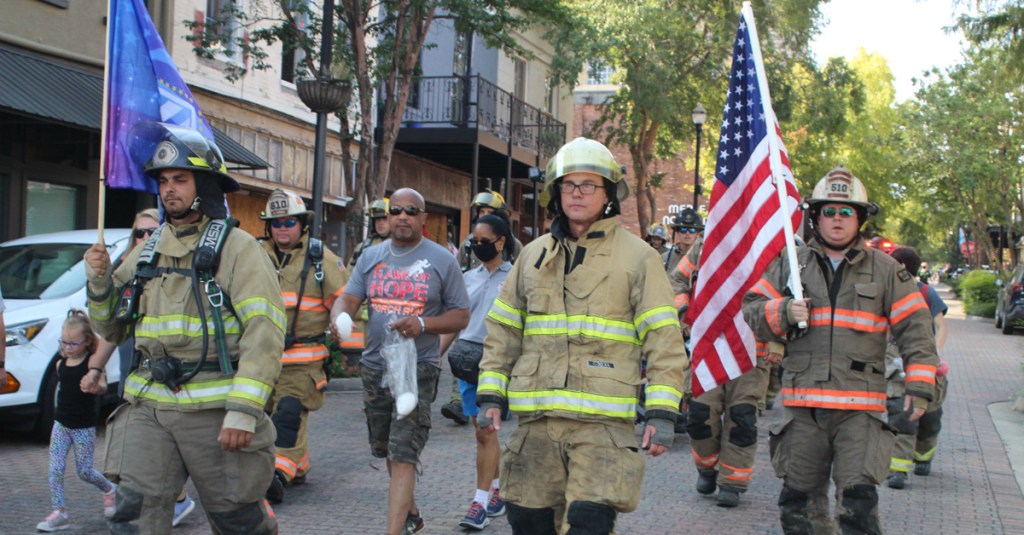 Vicksburg Fire Chief Craig Danczyk, center, and Vicksburg 911 Director Shane Garrard, right, who is also a volunteer firefighter with Culkin, march in turnout gear with other firefighters to remember the 340 New York firefighters lost in 9/11 during Saturday's memorial walk and parade. (Photo by John Surratt)

Vicksburg and Warren County’s first responders and equipment took over Washington Street on Saturday for a commemorative walk and parade through downtown honoring the firefighters who died Sept. 11, 2001, at the World Trade Center.

“The walk is just a small part of giving back to those 343 firefighters who lost their lives that day,” said Vicksburg-Warren 911 Director and Northeast Volunteer Fire Department Chief Shane Garrard.

Garrard said the event was held because there is no facility in the county to do a stair climb to honor the lost New York firefighters.

“Nationally, that’s what firefighters will do; they do a stair climb,” he said. “I think it’s something like 1,016 steps to simulate the height of the World Trade Center.”

In 2020, Garrard said, firefighters walked 3.5 miles in the Vicksburg National Military Park to honor the firefighters.

“This year and (in) years following, we want to do the parade route downtown,” he said. “We want the public to come out and be able to celebrate with us the lives of those guys. That’s the reason we went downtown. We want the families to bring out the kids and the grandkids and pay tribute on that significant day.”

Garrard said he anticipated more groups for the inaugural parade, but Hurricane Ida forced some of the departments and organizations invited to attend to change their plans because they were deployed to South Louisiana.

“One of those (groups) that would have been here was the Mississippi State Fire Academy, but they’ve got about 14 to 21 instructors down in South Louisiana,” he said.