Budget approved by Vicksburg board; Mayfield recuses self from vote 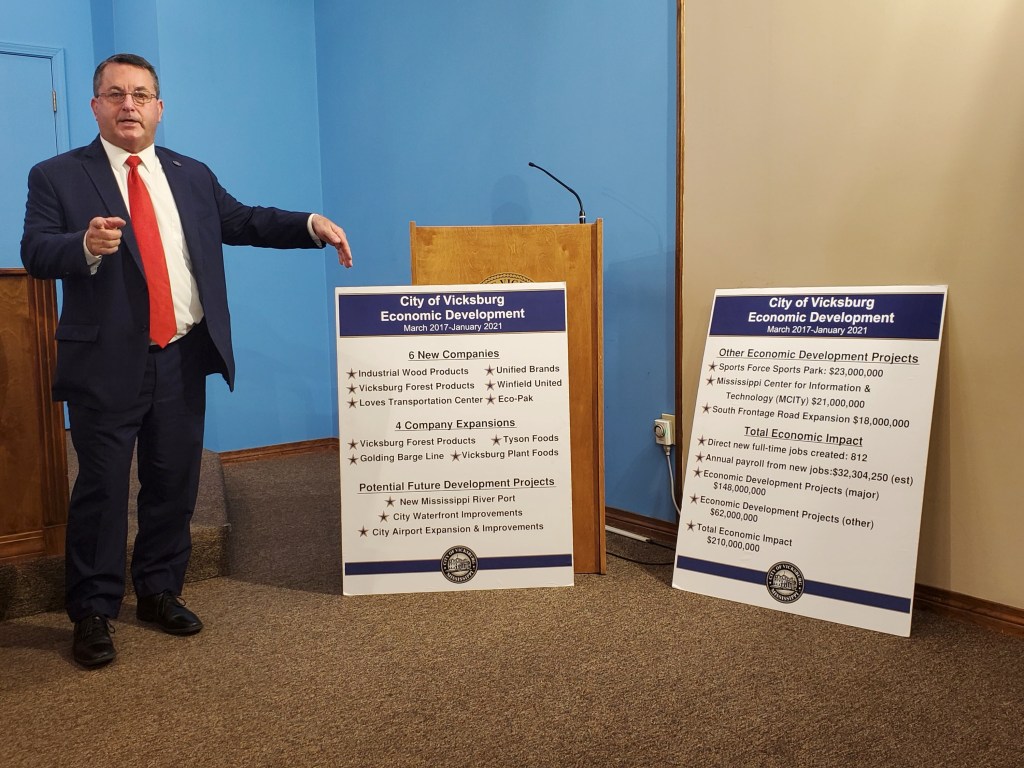 South Ward Alderman Alex Monsour presents a board showing economic development under Mayor George Flaggs Jr. as he argues in support of Flaggs' raise at Wednesday's board meeting. (Photo by John Surratt | The Vicksburg Post)

Beginning with the first pay period in October, Vicksburg city employees will be making more money.

The Board of Mayor and Aldermen Wednesday approved a $33.12 million fiscal 2022 general fund budget that includes pay raises for employees and Aldermen Michael Mayfield and Alex Monsour, a $20,000 raise for Mayor George Flaggs Jr. and a projected $11,118 surplus and no tax increase. The fiscal year begins Oct. 1.

Flaggs and Monsour voted for the resolution approving the budget and the ordinance setting the city’s raises. Mayfield recused himself from the vote.

After the meeting, Mayfield said he did not oppose Flaggs’ raise, but wanted the board to phase in the salary increase over time.

Phasing in Flaggs’ raise, he said, would have been a fairer way to do it.

“Nothing against him personally; I would never say he doesn’t deserve a raise because he does,” Mayfield said. “He chases the money and I appreciate that.”

Because the budget approval and the ordinance setting the raises were in the same resolution, Mayfield said he did not want to be in a position of voting against the employees.

“If I had voted against the resolution I would have been voting against all the employees’ raises, and that wouldn’t have been fair to them,” he said. “The best thing for me was to recuse myself.”

Monsour presented a case for Flaggs’ raise, at one point using a pair of display boards to show the city’s economic development growth under Flaggs’ administration.

“I don’t think everybody understands the process by which we go through to get revenue here, to get money here, to have these projects, these new companies and jobs,” he said. “It’s a job that somebody has to act as a lobbyist for the city of Vicksburg.”

Other cities, Monsour said, hire lobbyists for work for them at the Legislature and in Congress. Flaggs, he said, “Is our lobbyist.”

“There’s money that comes here but it doesn’t come because somebody just woke up and decided that they were going to send $20 million to Vicksburg; that’s not how it works,” he said.

Flaggs, he said, knows which officials in state and federal government to contact because he developed relationships with them in the past.

Lobbying for grants and other funds, Monsour said, is something Flaggs does outside his regular duties as mayor, adding that when a mayor wants to see a state or federal official, they make time for him. “A mayor carries weight,” he said.

“I’ll be glad to vote for a raise for this man if he continues to lobby for Vicksburg.”

The board also heard from Vicksburg resident Ruth O’Bannon, who asked the board to do more to increase the pay of the city’s laborers and police and firefighters to a living wage.

“These are the people who in the middle of the night we call to say, ‘Come fix this waterline,’ in freezing weather, it doesn’t matter,” she said. “They’re there; that’s who we depend on. That’s who your department heads stand on. It’s on the backs of these laborers that you can stand and boast about what kind of service you give to Vicksburg residents.”

She asked whether police and firefighters “are actually able to live on what they make and without having to get out and do extra jobs. It’s on the backs of these people that Vicksburg is what it is. I encourage us to do better for those people.”

Starting with the first paycheck in October, police, firefighters, EMTs and paramedics each get a 5-percent pay increase with other city employees getting a 3-percent raise if they have been employed for at least six months. Any division head who received a merit pay increase of $5,000 or more in 2021 will not receive the 3-percent raise.

Assistant supervisors, foremen and some non-supervisors in the public works department and some employees in the water and gas administration will receive raises besides the 3-percent increase.

Besides the pay raises, the board approved several new positions — a full-time assistant purchasing director, a part-time position in the cemetery will become full-time, a position in the traffic department and a permit technician in community development.