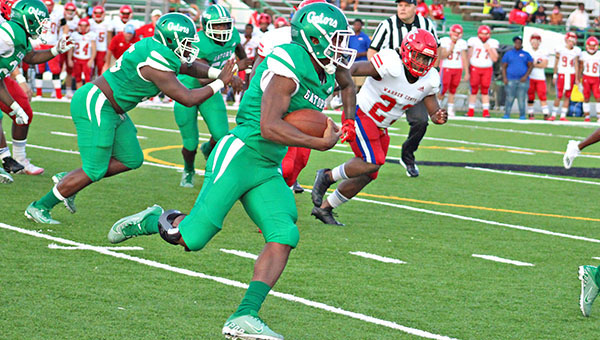 On the surface, Vicksburg’s matchup against Forest Hill on Thursday is just another game. One of 11 overall, and one of eight in Region 2-5A. The next one on the schedule.

In some ways, however, it might be one of the most important the program has had in years.

Vicksburg routed Canton last week to win its region opener for the first time in eight years. It has not started 2-0 in its league since 2007, and coach Todd McDaniel said accomplishing that would send a big message that the program’s fortunes truly are starting to change.

“It’s very important to build a program and let people know we’re not the same old Vicksburg. It’s very important to start a win streak. It takes another one to start that,” McDaniel said. “Most importantly, it’s getting the kids confidence and used to winning. We haven’t been winning on a consistent basis. So it’s going out on the field and expecting to win, instead of not knowing whether we’re going to win or not.”

Vicksburg Warren School District officials announced that the game has been moved from Friday to Thursday at 7 p.m. because of the threat of bad weather. Tickets and streaming links will remain the same.

Rain from slow-moving Tropical Storm Nicholas began moving through the area Tuesday and is forecast to linger until the weekend. McDaniel said the forecast was slightly more favorable for Thursday evening than Friday, however.

“I believe we may catch a break tomorrow,” McDaniel said Wednesday morning.

The Gators rushed for 366 yards and six touchdowns as a team in the 45-0 victory. Three running backs — Otis James, Alex Jefferson and Johnny Smith — had at least 85 yards, and all three scored touchdowns. James led the team with 137 yards and two TDs on only eight carries.

The defense also scored a touchdown, on a 45-yard fumble return by Eric Wesley, and the special teams blocked three punts. It was a complete effort, although McDaniel said there were still mistakes to clean up.

“It shows a lot of potential, but when you go back and look at the film it shows a lot of youth, too,” McDaniel said. “Things that we’ve been working on for quite some time and we didn’t do them as aggressively as we should, or as aggressively as we’ve been the last few weeks. In order to win at the level we want to win at, it’s going to take that tenacity through the entire season.”

The Patriots have not had much better luck since then. They lost 45-14 to Neshoba Central last week, but it took a 21-point fourth quarter for Neshoba to finally put the game away.

Forest Hill’s defense also held Warren Central to less than 200 total yards, and its Week 2 result was a 21-18 loss to South Jones. That track record has McDaniel wary of the Patriots, even if they’re coming back to Vicksburg as a winless team.

“They have a really good defense. They can get after it. They’re some tough-minded kids. It’s not going to be a giveaway,” McDaniel said. “If we can go out there and keep our intensity level high and play fundamentally sound and disciplined football, we’re going to be fine, but they’re not going to come out here and lay down for us.”