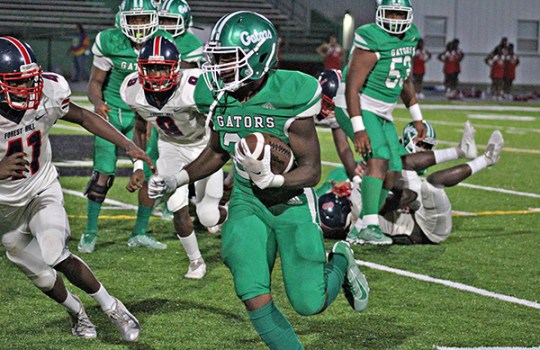 Vicksburg High running back Otis James carries the football Thursday against Forest Hill. James rushed for 105 yards and one touchdown to help the Gators to a 46-0 victory. (Ernest Bowker/The Vicksburg Post) 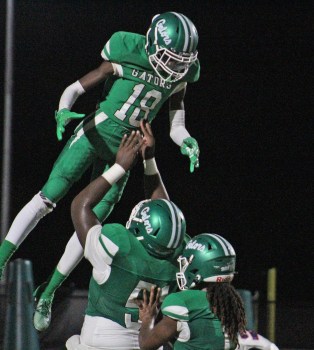 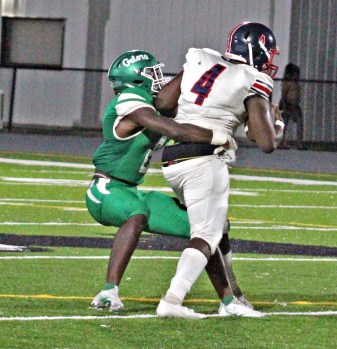 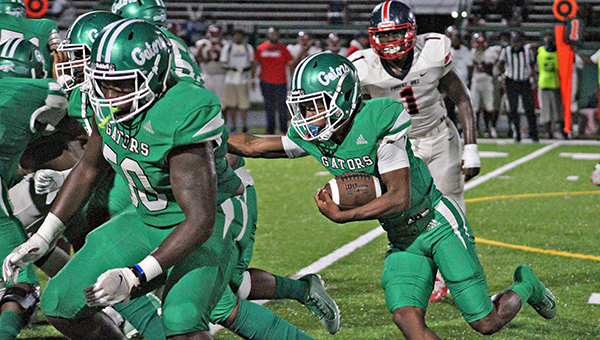 It’s only a month into the season, but Vicksburg High’s football team is already doing things that The Swamp hasn’t seen in years.

The Gators returned two of their four interceptions for touchdowns, rushed for 248 yards as a team, and thoroughly dominated Forest Hill 46-0 on Thursday.

Vicksburg improved to 2-0 in region play for the first time since 2007 by posting its second straight shutout. It had not accomplished the latter feat since shutting out three consecutive opponents late in the 2008 season.

“It feels good when you’ve got a great group of guys you’re working with, a great group of kids, we’re just trying to be family,” Vicksburg head coach Todd McDaniel said. “It’s great to be 2-0. We played some great games earlier this year that didn’t turn out the right way, but we kept fighting and kept plugging. We’ve got to find a way to be 3-0 now.”

After routing Canton 45-0 in last week’s region opener, the Gators jumped on Forest Hill (0-4, 0-2) for 27 points in the first half of Thursday’s game.

Malik Montgomery capped a 6 1/2 minute, game-opening drive with a 4-yard touchdown run, and added a 13-yard TD run on the first play of the second quarter. In between, Kearris Gilliam returned an interception 24 yards for a score.

Otis James finished the first-half scoring with a 33-yard touchdown run with 7:07 left in the second quarter to make it 27-0. Vicksburg scored three more times in the second half, but for all intents and purposes the outcome was decided long before then.

“We’re trying to develop the killer instinct. No game is over until the final whistle blows. And we’re trying to make sure that we’re technique sound, because we’re going to play some really good football teams,” McDaniel said. “We’re going for a district championship, and in order to win it we’re going to have to be technique sound all the way across the board. We’ve got to keep working. We can’t take anybody lightly. We’ve just got to keep playing football and bring pride back to The Swamp.”

James finished with 105 rushing yards and one touchdown, and Montgomery carried seven times for 48 yards and two touchdowns. Johnny Smith also had 36 yards and a touchdown, and Ronnie Alexander threw a 31-yard touchdown pass to Tyler Henderson in the third quarter.

The offense had a modest yardage night — only 278 total yards — because the defense and special teams kept setting them up with short fields.

Out of eight offensive possessions for the Gators, the worst starting field position was their own 42-yard line.
Forest Hill’s deepest advance into Vicksburg territory, by contrast, was the 35-yard line. The Patriots finished with 61 total yards, and only ran nine plays on the plus side of the 50-yard line the entire game.

Gilliam, Julien Demby, Eric Wesley and Wallyeke Curry each had an interception. Forest Hill quarterback Delvin Lacy was 8-of-23 for 55 yards.

In addition to Gilliam’s pick-six, Demby returned an interception 30 yards for a touchdown late in the third quarter. He drew a penalty for excessive celebration when, after crossing the goal line, he slid in the back of the end zone and his teammates piled on top of him.

Demby was happy to get the touchdown, but said the penalty was an accident.

“I cramped up. I didn’t try to fall on purpose,” he said with a smile.

In addition to the defense, Vicksburg’s special teams had a big night.

Jamichael Adams returned the opening kickoff 30 yards to set up the first scoring drive, and then recovered a fumble on the kickoff following Gilliam’s interception return touchdown to give the offense the ball at the Forest Hill 24. Montgomery scored six plays later.

Tyler Carter’s 25-yard punt return in the fourth quarter set up Smith’s 5-yard TD run that made it 46-0 with four minutes remaining.

Even Trinity McGloster, who is first girl to play football for VHS since 2014 and just joined the team last week, was 3-for-5 on PAT attempts.

“We’re playing great special teams over the past four weeks. People haven’t realized that,” McDaniel said. “When I first got here we gave up a lot of points on special teams. So that’s an important part of how we’re playing right now. They’re setting the tone on kickoffs and doing an awesome job.”