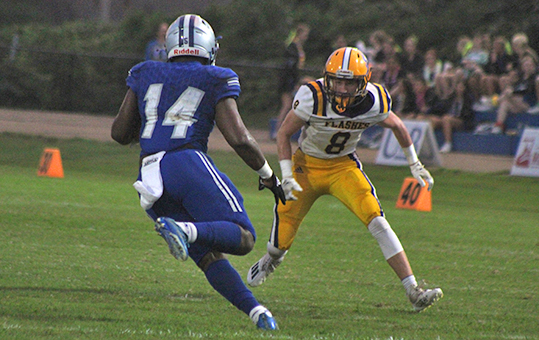 NATCHEZ — Adams County Christian gashed St. Aloysius with explosive running plays in the first half, and used a big turnover of its own to overcome a sloppy performance as it cruised to a 35-6 win over the Flashes Friday night.

Dontavious Stampley scored on a 49-yard touchdown run and Jamar Kaho had a 75-yard TD as ACCS won its third consecutive game. Samuel Merriett also scored on a 25-yard interception return for the Rebels (3-1, 1-0 MAIS District 3-4A), who turned the ball over three times.

Cooper Madison had an interception for St. Al, while Damien Reeves had a fumble recovery.

“You never want to have mental mistakes,” ACCS coach David King said. “You don’t want fumbles in Week 5. Our goal is not to be good but to be great. You can’t make mistakes like we did tonight. The fun part of being the coach is correcting that. We have to practice hard. The effort is there, and our assistant coaches and players are getting after it in practice.”

The Flashes held ACCS to one touchdown in the second half, but their only points came on a 6-yard touchdown pass from Tristan Wilbanks to Chase Tucker that was set up by a fumble deep in ACCS territory.

St. Al coach Bubba Nettles said his team came out flat to start the game. It cost them to score just six points off of three turnovers, he said.

“It’s impossible to win a game with six points,” Nettles said. “We gave up 28 points quickly before we could get the kids settled down. We came out in the second half and played the correct way. We only gave up one touchdown. We have to come out hot in all four quarters and not just the first or fourth. I thought the fumble recovery off the bat was huge for us. I wish we would have been able to capitalize off of it. The kids have to learn and understand momentum.”

ACCS had a shaky start by fumbling on its first drive. Damien Reeves recovered at the St. Al 35-yard line but it did not lead to any points.

A few plays later, Stampley got a handoff and raced down the sideline to score on a 49-yard rush. Stampley finished the game with four rushes for 75 yards, a touchdown and two fumbles.

On next ACCS drive, Kaho ran to the perimeter and down the left sideline. Making a tackler miss, he cut inside and leapt out of the grasp of a St. Al defender to score on a 75-yard run. The touchdown gave ACCS a 14-0 lead with 13 seconds left in the first quarter.

“That was my first time lining up in the backfield,” said Kaho, who had two receptions for 51 yards in addition to his touchdown run. “I turned my speed on and scored a touchdown. I didn’t know he (the defender) was back there. Usually, it is hard for guys to tackle me because my legs are so long.”

St. Al turned a fumble into Tucker’s touchdown catch on its next possesion, but Adams Christian answered right back.

Taqi Griffin extended the Rebels’ lead with a 12-yard reception on a slant route. He shed a tackler and walked into the end zone to make it 21-6 with 1:39 left in the second quarter.

Thirty seconds later, Merriett broke on an overthrown pass from Wilbanks and made the interception at the 25-yard line. Merriett had nothing but the open field in front of him as he stuck his index finger into the air and strutted into the end zone.

ACCS’ last touchdown came on a 25-yard pass from Coleman Carter to Collin Cauthen early in the fourth quarter.

“If we want to go where we are used to going, we can’t make the same mistakes tonight. It cost us,” King said. “St. Al tested us. They played hard. They play physically, and St. Al always does.”

St. Al will return home next week to play Catholic school rival Cathedral. The Flashes are still hunting for their first win, but Nettles said he was proud of the team so far.

“I’d much rather have a lot more wins in the win column than zero. But in terms of them learning and becoming a much better football team, we have accomplished that,” Nettles said. “I’m not going to gripe or complain, or hold them to any unrealistic expectations. Those kids are giving myself and my staff and St. Aloysius everything they’ve got.”