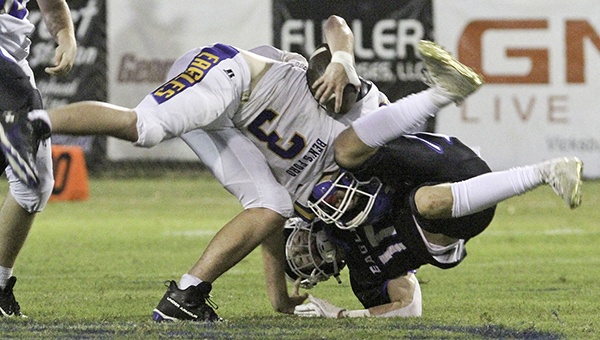 Jace Riggs threw three touchdown passes and ran for another score, Tyler Washington finished with 193 total yards and three touchdowns, and the Eagles bounced back from an embarrassing loss last week by crushing Ben’s Ford 52-6 on Friday night.

“It was a whole lot better this week. We got some movement going and we got our people flowing, and when everybody does their jobs things go right,” said Riggs, who was 10-of-15 passing for 204 yards, with the three touchdowns and two interceptions. “Our defense is doing their job, our O-line is blocking, our wide receivers are running their routes, our coaches are calling the right plays, everybody is doing their job. When people are doing that, everything flows.”

In a fitting twist, PCA (3-2) won by the same score it was beaten by last week against Claiborne Academy. Friday’s game was a 180-degree turn from that one in tone as well as score, as the Eagles scored on their first two plays from scrimmage and built a 32-point lead by halftime.

Jase Jung and John Wyatt Massey each had two interceptions on defense, and four players scored touchdowns on offense. Massey had 10 tackles and a forced fumble to go along with his two picks.

“You win the turnover battle and dominate the line of scrimmage, most of the time you’re going to come out on the right side of it. We did that, as we have in the three games we’ve won,” PCA head coach Blake Purvis said. “When we dominate the line of scrimmage, we have success on both sides of the ball. It all starts with those guys up front. They led us in the trenches and it led to big plays on both sides.”

Two of the biggest plays came before the sun had set in the cloudy western sky.

Jung had an interception return touchdown erased by a holding penalty on the game’s opening possession, but PCA kept the ball and scored on its first snap. Washington broke off a 61-yard touchdown run, and Riggs’ two-point conversion pass to Thomas Azlin made it 8-0 with 7:20 left in the first quarter.

After Ben’s Ford went three-and-out on its next possession, PCA took over at its own 28. Azlin was split out wide left with no defenders on him, and Riggs alertly snapped the ball and tossed it to him. Azlin ran 72 yards to the end zone for another one-play touchdown drive.

PCA also scored on a 36-yard pass from Riggs to Washington with a minute left in the quarter to make it 22-0, but that drive took five plays.

Ben’s Ford got on the board early in the second quarter when Gage Adams caught a wide receiver screen pass, got a block to avoid the first defender, and turned it into a 40-yard touchdown.

PCA’s Taylor LaBarre returned the ensuing kickoff inside the Ben’s Ford 20, however, and Willie Rogers scored on a 6-yard run two plays later to blunt any momentum the visitors had gained.

Riggs added a 6-yard TD pass to Rogers in the final minute of the second quarter to put PCA ahead 38-6 at halftime.

Riggs and Washington each had touchdown runs in the second half to finish the scoring.

“It just gets the momentum going and gets everybody hyped up,” Riggs said of PCA’s fast start. “When everybody’s going, it’s a good game at the end of the game and you can see it from the results.”

Washington just missed having 100 yards rushing and receiving in the game. He carried the ball eight times for 97 yards and two touchdowns, and caught two passes for 96 yards and a touchdown.

Rogers also scored two touchdowns, and Azlin caught three passes for 90 yards and a TD. Riggs added two two-point conversion runs and a pair of two-point passes to his totals as well.

All in all, it was the kind of game the Eagles needed to wash the rotten taste out of their mouths from last week’s debacle. It rekindled their hopes of reaching the MAIS Class 2A playoffs and got them back on track heading into next week’s home game against Wilkinson County Christian.

“It’s always good to get a win. Wins are good,” Purvis said. “Getting back to doing what we were doing three weeks in a row, and playing the style we like to play where we dictate what we’re going to do. We’re going to run when we want to and throw when we want to. So it’s getting back to that style hopefully getting into a rhythm moving forward.”