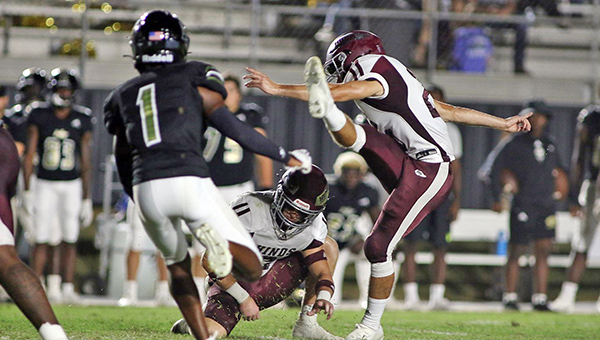 BOONEVILLE ­— Hinds Community College used its defense and special teams to get back in the win column.

Ben Duncan kicked three field goals, while the Eagles’ defense forced four turnovers, scored on a safety and had a late goal line stand in an 18-13 win over Northeast Mississippi on Thursday night.

In the final two minutes, Hinds’ defense came up with a goal line stand to secure the win. Northeast moved the ball to the 1-yard line with 1:20 remaining before the Eagles forced a fumble that was recovered by Jaylen Knight.

“The key to the game was our four turnovers,” Hinds defensive coordinator John Hendrick said. “We still need to work on limiting big plays and tackling better as the season progresses.”

Putt completed 20 of 30 passes for 250 yards and two touchdowns — both to Goldman Butler — but Northeast Mississippi (0-3) never led. The early safety and a 9-yard touchdown pass from BeSean McCray to Jaiden Burns midway through the first quarter put Hinds ahead 9-0.

McCray finished 15-of-29 passing for only 114 yards, with one touchdown and no interceptions. Jamarian Samuels rushed for 97 yards on 22 carries, and Kaleb Mosley caught six passes for 51 yards.

Mekhi Norris threw a touchdown pass to Kobee Lockett in the first half for Coahoma.

Michael Hiers ran for a 9-yard touchdown and threw a 17-yard TD pass to D.T. Sheffield in the second quarter to put Northwest ahead 27-10, following a back-and-forth first quarter.

Sheffield finished with five receptions for 98 yards and a touchdown for Northwest.

Thomas McCauley rushed for 104 yards for Holmes, and Kyren Batey added 66 yards and one touchdown.

Jones had five interceptions, including a 65-yard touchdown return by Kenderian Dixon on the game’s final play. Dixon and Drew Horton each had nine tackles.

Gabriel Larry threw for one touchdown and ran for another for East Central.

Drexlan Allen also ran for 89 yards and a touchdown for Co-Lin, and Bryce Lofton kicked a pair of field goals. Lofton’s 25-yard field goal with 4:51 left in the third quarter put the Wolves ahead 36-7.

Southwest quarterback Luke Alleman was 22-of-30 passing for 203 yards and two touchdowns, but he also threw three interceptions and was sacked twice.

East Mississippi’s defense had nine tackles for loss, including three sacks, and forced four turnovers. Joshua Short returned a fumble for a touchdown.