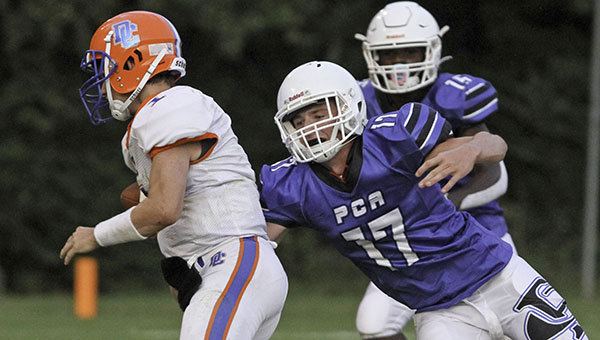 After enjoying three weeks of solid football where most things went right, Porter’s Chapel Academy came to work this week facing a very big challenge — how to pick up the pieces from a game where nearly everything went wrong.

The Eagles were routed 52-6 by Claiborne Academy last Friday, immediately killing the good vibes of a promising 2-1 start. They’ll host Ben’s Ford this Friday and try to regain the momentum that evaporated in their previous outing.

“There’s a lot of challenges this week. Homecoming week, and all the distractions that go with that. And then coming off the loss, it’s going to be a tough week,” PCA head coach Blake Purvis said. “We’ve got to prepare mentally as well as physically and schematically, and fix our mistakes and not allow things we can’t control to affect the things we can control.”

PCA averaged 50.7 points per game in its first three outings, and jumped out to a 6-0 against Claiborne by scoring on the game’s opening possession. Claiborne scored the next 52 points as Purvis said his team unraveled from a mental and physical standpoint.

“We allowed the things that were outside of our control to affect the things that we could control. We got off our game and just didn’t perform the way we had been performing,” Purvis said. “We found some spots where we’re vulnerable, and some things we need to fix. And I think we will. We just have to get back to work, and get back to our process, and do what we do.”

Last week’s loss added some extra importance to this week’s contest against Ben’s Ford (1-3). Porter’s Chapel (2-2) only has three district games, so after losing the first one its best chance of reaching the postseason might be as one of nine wild card teams that are selected via the MAIS power points system.

Beating Ben’s Ford, then, is not only necessary to get back on track but absolutely crucial to the Eagles’ playoff chances.

“Power points are going to be important for us. They were even as a district champion, because you want to get the best seed you can. I don’t know that it becomes any more important than it was to begin with, but it definitely will help us in the power point ratings,” Purvis said.

Ben’s Ford picked up its first victory of the season last week against hapless Discovery Christian, but was outscored 110-6 in its first three games.

Purvis was confident the Eagles could come out on top, provided they’re able to shake off last week’s performance and ensure one bad night does not turn into a losing streak.

“They’ve got some athletes, just like most everybody does in 8-man. They’ve got some playmakers you need to keep contained, and if you don’t they can make big plays on you,” Purvis said. “They play well up front, and we’re going to have to get back to what we were doing in the first three weeks in order to find success.”