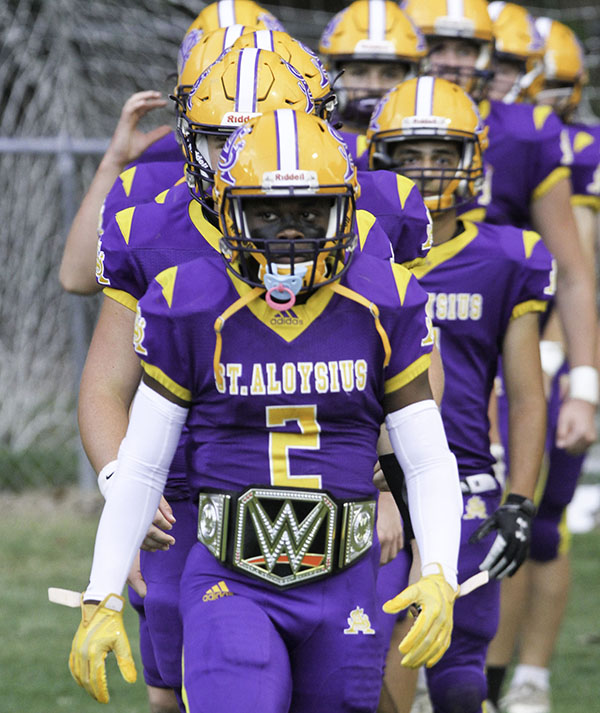 St. Aloysius running back Padre Gray (2) leads his team onto the field earlier this season. Gray and the Flashes will play at Adams County Christian School on Friday. (Paul Ingram/For The Vicksburg Post)

There are eight winless teams through four weeks of the MAIS football season. Without a doubt, the best is St. Aloysius.

The Flashes are 0-4, but have lost their last two games by a total of 13 points and have led at halftime three times.

“I can assure you I’m not going to be getting any phone calls in the near future for scheduling us for homecoming,” St. Al coach Bubba Nettles laughed. “We’re no longer a pushover, which is a huge accomplishment, and for that I’m extremely proud of my staff and these kids.”

The Flashes are still winless, though, having been derailed by different strings of mistakes in each game, and the next one on the schedule might be their most difficult test yet. They’ll travel to Natchez on Friday to take on Adams County Christian School (3-1, 1-0 MAIS District 3-4A), a Class 5A finalist in 2020 that moved down a level and into St. Al’s district this season.

It’s clearly not an ideal matchup at this point in the season, but Nettles thinks the Flashes are close enough to getting over the hump that they’re capable of springing the upset.

“I can assure you we are up to the challenge to play ACCS,” Nettles said. “They’ve been beaten this year. The thing for this week is ‘why not us?’ It’s on them. They have to believe we can beat them, and I think they do, so we’ll be ready to play Friday night no matter what the weather looks like.”

The biggest obstacle, Nettles said, will be a matchup issue — and it’s literally a big issue.

ACCS has seven linemen on its roster listed at 280 pounds or heavier, including twin brothers Kyron and Kamron Barnes who anchor the left side of the line. St. Al’s much-smaller defense will try to counter with speed and discipline, but Nettles said if they’re not careful bulk will win the battle.

“They have a huge, massive offensive line. If our kids can get over that aspect, of how big they are, and do assignment football which our defense is designed to do — be fast, be quick with our stunts and slants — we’ll be OK,” Nettles said. “If they find themselves locked up one-on-one with one of those big monsters then that’s entirely on them. We have coached them to not have that happen.”

St. Al will add some bulk in its running game. Senior running back Adam Francisco suffered an ankle injury against Brookhaven Academy last week and will not play against ACCS. Nettles said he’ll turn to 200-pound freshman Thompson Fortenberry to fill the void.

“He’s about 6 foot, 200 pounds, and we’re going to look at him heavily this week as the replacement for Adam,” Nettles said. “You can’t replace an Adam. He’s the heart and soul of this team. Instead of trying to replace that, we’re going to try a different route with a big, bruising running back. He’s young, but he has all the talent in the world.”

The biggest key to victory for the Flashes might, however, be avoiding the mistakes that have plagued them for a month. Penalties and big plays were costly the first three games, and last week a fourth quarter meltdown turned a seven-point lead into a 33-27 loss in the blink of an eye.

Brookhaven Academy scored on a deflected pass and an interception return in the span of 69 seconds midway through the fourth quarter. St. Al had the ball just across midfield twice in the last six minutes, but turned it over both times. On its final possession, clock management was also an issue.

Nettles said the Flashes worked on the hurry-up offense for nearly a half hour on Monday.

“We have improved dramatically, but we’re still not to the point where we can shoot ourselves in the foot and expect everything to still be OK,” Nettles said. “They understand that’s something they have to fix. We can call the right plays and teach them the right thing, but when the lights are on and the band’s playing, it’s on them after that.”

Despite the mistakes and the 0-4 start, Nettles added he was proud of his team for their effort and the turnaround they’ve made so far. He feels it’s only a matter of time before things finally click into place.

“Every team we’ve played knew they were in a fight. Where last year, there wasn’t a field we stepped on where we weren’t blown out. It isn’t a whole lot of ‘We’re going to be OK.’ It’s more, ‘Guys, we are this close. Let’s figure it out and get it going,’” Nettles said. “They realize how improved they are. I attribute that to my coaching staff and I attribute that to our kids. They have worked their tails off.”