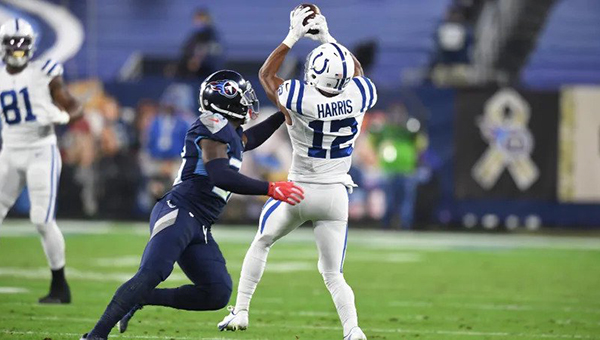 Indianapolis Colts wide receiver DeMichael Harris (12) makes a reception against the Tennessee Titans last season. Harris, a Vicksburg native, was activated from the team's practice squad to the active roster for Sunday's game against the Los Angeles Rams. (Courtesy of the Indianapolis Colts)

It didn’t take long for DeMichael Harris to get back in the game for the Indianapolis Colts.

The NFL team announced Saturday that it has activated the Vicksburg native and former St. Aloysius star from its practice squad for Sunday’s home game against the Los Angeles Rams.

Harris was released and then signed to the Colts’ practice squad at the end of training camp. The wide receiver followed the same route onto the team’s roster as a rookie in 2020, after originally signing as an undrafted free agent from Southern Miss. and wound up playing in seven games.

Harris caught 10 passes for 79 yards and had six rushing attempts for 46 yards last season, and also played in the Colts’ playoff game against Buffalo.

Harris was not on the active roster for last week’s season-opening 28-16 loss to Seattle.

The Colts and Rams kick off at noon on Sunday at Lucas Oil Stadium in Indianapolis.