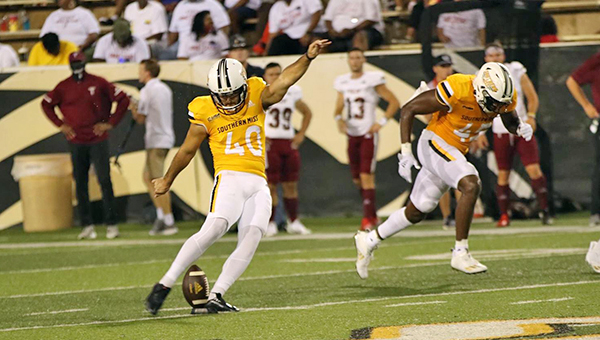 HATTIESBURG — A large crowd came to M.M. Roberts Stadium to cheer on Southern Miss on Saturday. The Golden Eagles’ offense gave them something to cheer about on the opening possession, then left early.

Southern Miss netted a a 46-yard field goal by Briggs Bourgeois on the game’s opening possession, and then did not score another point on offense. Its lone touchdown came on a 47-yard fumble return by Everitt Cunningham with 3:04 left in the fourth quarter.

The Golden Eagles (1-2) finished with 156 total yards, punted on 11 of 15 possessions and turned it over twice. Quarterback Ty Keyes was sacked nine times, which led to USM finishing with minus-1 yard rushing. The team’s leading rusher was Frank Gore, who had 31 yards on 15 carries.

“Really disappointing loss. At home, I thought our fans came out, had a great energy. We played really, really hard on defense for a long time and gave ourselves a chance to win. Thought we played really good in the kicking game. It’s just disappointing that we couldn’t generate any offense,” Southern Miss coach Will Hall said. “I coach the offense, I coach the quarterbacks, it’s on me. I’ve got to coach better. I’ve had a lot of great offenses in my career, won a lot of championships. Rome wasn’t built in a day and we’re certainlynot building Rome fast enough here right now offensively.”

Southern Miss was ranked No. 7 nationally in total defense, and held Troy to a modest 304 total yards — including 49 rushing. But Southern Miss’ offensive struggles allowed the Trojans to stay in the game and eventually surge into a commanding lead.

Powell threw a 20-yard touchdown pass to Jabre Barber as Troy (3-0) took its first drive after halftime for 75 yards and the lead, 7-3. By the end of the third quarter, the score was 14-3 after Powell found Deyunkrea Lewis from 16 yards out.

With about six minutes left in the game, Vidal found a narrow seam on the right side to fight his way into the end zone from the 8, capping the second-half rally.

Powell completed 27 of 39 passes for 255 yards, with the two touchdowns and no interceptions. He was sacked four times. Vidal Had 45 yards on 17 carries, and Tez Johnson caught 10 passes for 106 yards.

“There’s a lot that I have to fix to put the team in a better position. The defense stayed on the field way too long,” Keyes said. “If we would have moved the ball well on offense, we would have had some good shots to win the game. We just didn’t execute overall as a team.”