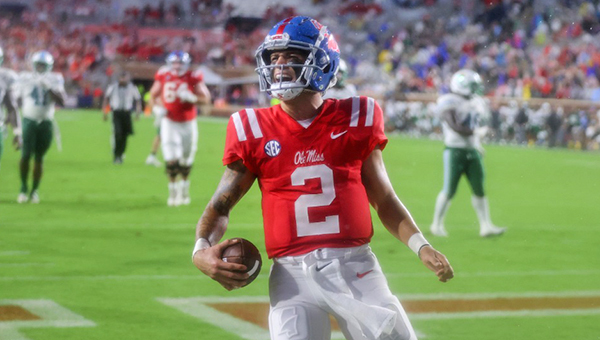 OXFORD (AP) — Matt Corral was not going to let an extended weather delay spoil his night. The Ole Miss quarterback shrugged off the nearly two-hour pause and posted a record-setting performance.

“We had the best week of practice that we’ve had since I’ve been here,” Corral said. “It showed tonight. The weather wasn’t going to stop us.”

Corral accounted for a school-record seven touchdowns in less than three quarters as No. 17 Ole Miss defeated Tulane 61-21 Saturday night.

Corral ran for four touchdowns – 9, 15, 15 and 6 yards – and passed for three scores, finishing 23-of-32 for 355 yards. Corral had touchdown passes of 12, 50 and 45 yards to Dontario Drummond, Jonathan Mingo and Braylon Sanders, respectively.

Corral was lifted after directing three scoring drives early in the third quarter to build a 61-21 lead, capped by his final two touchdown runs. The Rebels finished with 707 yards of total offense, 403 by Corral, on a pace to merit consideration in the Heisman Trophy race.

It’s the first time an Ole Miss player has accounted for seven touchdowns since Arnold “Showboat” Boykin scored seven rushing touchdowns in a 49-7 win at Mississippi State in 1951. Corral became the first player to pass for three touchdowns and rush for four in a single game in Southeastern Conference history.

“The numbers really don’t mean much to me. Not really,” Corral said. “But I think they mean something to him (Coach Lane Kiffin) and I think he wants it more for me than I do. I’m just happy we played so well.”

The Rebels (3-0) responded to the weather delay efficiently, scoring on six of the seven opening possessions, including touchdown runs of 19 and 11 yards by Henry Parish Jr. and Drummond. Jerrion Ealy led the Ole Miss rushers with 15 carries for 103 yards.

The Rebels tied the SEC record with 41 first downs.

Tulane (1-2) was led by Michael Pratt with 166 yards on 10-of-18 passing, including touchdown passes of 39 and 22 to Shae Wyatt and Tyrick James, respectively. Cameron Carroll added a 1-yard touchdown run, but the Green Wave could not match the early pace, trailing 40-21 at halftime.