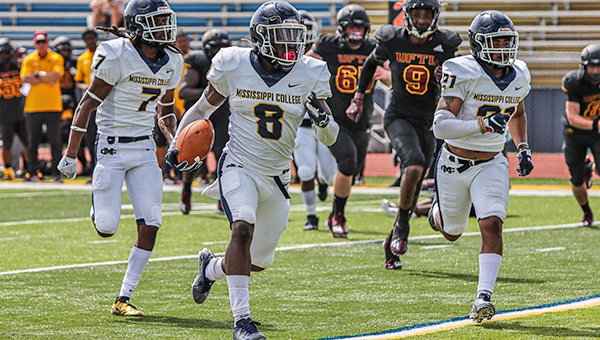 MOBILE, Ala. — Kareem Walker ran for 150 yards and three touchdowns, and South Alabama rallied and then held off Alcorn State for 28-21 win on Saturday.

Tre Young intercepted the Braves’ Felix Harper in the end zone with 1:55 left to preserve the lead.

Trailing 14-7 at halftime, the Jaguars (3-0) tied it at 14-all on Walker’s 13-yard run with 12:12 left in the third quarter before taking the lead for good on his 35-yard scoring run less than two minutes later.

South Alabama made 28-14 when Bryan Hill ran it from 11 yards to end a 10-play, 71-yard drive that lasted five minutes, but Alcorn had a rally of its own still to come.

The Braves had the ball twice more and moved inside the South Alabama 20 both times. One drive ended on downs at the 7-yard line, however, and Harper threw the interception to Young on third-and-13 from the 15-yard line with just under two minutes to go.

Harper finished 20-of-33 passing for 265 yards and one touchdown, and CJ Bolar caught five passes for 128 yards. Alcorn only had 32 rushing yards.

South Alabama rushed for 236 yards as a team, helping it overcome four turnovers.

After Sutherland opened the scoring with a 29-yard field goal in the first quarter, Jackson State took the lead in the second period when Joshua Lanier caught a 24-yard touchdown pass from Shedeur Sanders.

The Tigers’ lead held up until the fourth quarter, when Sutherland hit from 42 and 49 yards. Sutherland also kicked a 45-yarder in the third quarter.

Sanders completed 27 of 40 passes for 243 yards, and Lanier caught seven passes for 72 yards. Aubrey Miller Jr. was credited with 16 tackles for Jackson State (2-1).

For the Warhawks (1-1), Rhett Rodriguez completed 16 of 29 passes for 150 yards and Andrew Henry had nine carries for 52 yards.

After forcing the Delta Devils into a three-and-out on the opening drive, Self threw a 48-yard touchdown pass to Xavier Gipson to end a five-play, 66-yard drive.

Gipson finished with 131 yards and two touchdowns on three receptions. He added another touchdown on a 70-yard punt return in the second quarter.

Jeremiah Walker returned an interception 40 yards and Myles Brooks took another back 14 yards for touchdowns for Stephen F. Austin (2-1).

Mississippi College (1-1) only threw two passes in the game — one of which was a 26-yard touchdown from Tytus Heard to Ian Thies — and rushed for 351 yards. Ron Craten scored two touchdowns for the Choctaws, and six other players had one.

Collins was the team’s leader in rushing yardage, and Joshua Hernandez had 60 yards and a touchdown. Ten players had at least one carry.

Fort Lauderdale (0-2), a member of the National Christian College Athletic Association playing its first season of football, had 108 yards of total offense and six first downs.

Frost was 29-of-50 passing for 292 yards, with two touchdowns and two interceptions. One of his interceptions was returned 23 yards for a touchdown by Emanuel Barber to give Delta State a 26-20 lead with 10:07 remaining.

Frost led West Georgia right back down the field, however. The Wolves marched 90 yards in 12 plays and just over five minutes, capped by the 21-yard TD pass to Lambert. Omar Cervantes’ PAT gave the Wolves a 27-26 lead.

Delta State turned it over on downs just across midfield with 1:11 to play, and West Georgia was able to run out the clock.

Delta State quarterback Patrick Shegog completed 19 of 23 passes, but for only 110 yards. He added 71 rushing yards. Kory Gainwell and Deion Dampier each scored rushing touchdowns for the Statesmen.

Dudik’s 5-yard touchdown run gave SAGU a 21-0 lead with a minute left in the first quarter. Millsaps cut the deficit to 10 early in the fourth quarter before Dudik broke off a 63-yard TD run to ice the game.

Kaleb Thompson completed 19 of 30 passes for 244 yards and three touchdowns for Millsaps. Moise Tezzo caught seven passes for 85 yards and one TD, and Austin Russell caught five for 75 yards and a TD.

Kyle Jones threw two touchdown passes, and Kolby Youngblood ran for 56 yards and a TD for Hardin-Simmons (3-0, 2-0), which is ranked No. 6 in NCAA Division III.

Belhaven rushed for 233 yards as a team. Koble Blunt led the Blazers with 101 yards on 10 carries, to go along with 40 receiving yards, and Brad Foley had 66 yards and one touchdown. Quarterback Mayowa Asagunla ran for 59 yards and a TD.