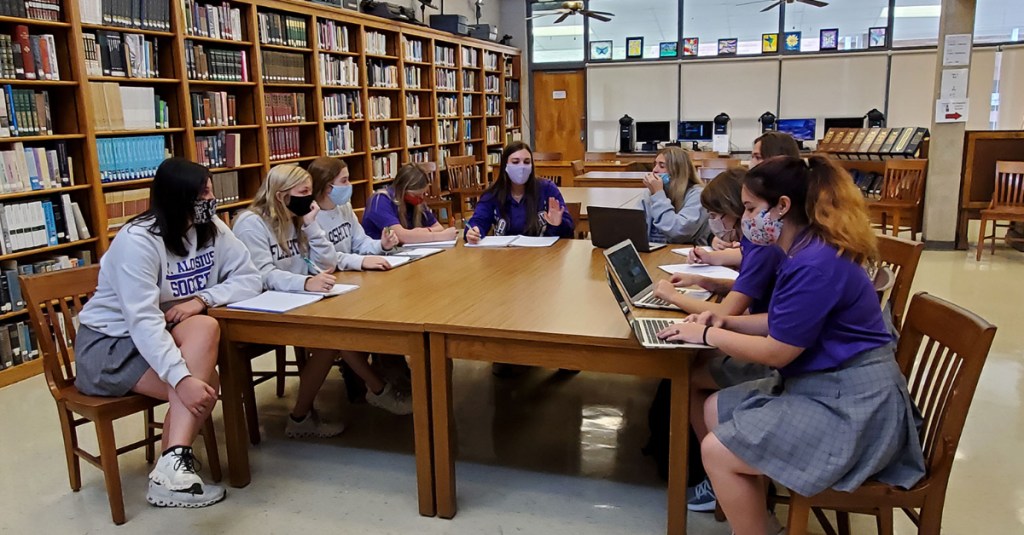 The school, with the assistance of the senior class’s September of Service Committee, is collecting money to repair the playground at St. Mary’s Nativity in Raceland. The goal is $5,000 for the project.

St. Mary’s is in Lafourche Parish in South Louisiana. It is one of 11 schools in the Diocese of Houma-Thibodaux, which covers Lafourche and Terrebonne parishes, part of St. Mary Parish including Morgan City, and part of Jefferson Parish that includes Grand Isle.

St. Mary’s Nativity has grades pre-K3 to eighth grade and “is a little school; a small school,” said Kimberly Cyr Domangue, a St. Aloysius alumnus who lives in Raceland and whose two children attend St. Mary’s.

When Hurricane Ida hit South Louisiana, St. Mary’s was one of the victims.

“There was damage to the back part of the school,” Domangue said. “One of the classrooms had water damage and some broken windows.”

The school’s metal awnings and the metal roof were crumpled and will have to be replaced, she said. Two oak trees fell on the playground, she said, adding that the school is connected to the church and the church had significant damage.

Soon after the storm, she said, Joan Thornton, a theology teacher at St. Aloysius and senior class sponsor called looking for a project for the seniors’ September of Service committee.

“She knew I lived in Raceland and called to check to see if there were any schools damaged in the area from the storm,” Domangue said. “I put her in touch with Ms. (Marissa) Bagala, St. Mary’s principal.”

When she called Bagala, Thornton said, “I asked her what they needed and she said the storm destroyed the school’s playground and she asked us to do that.”

“We will have a blue jean day next week in which the elementary school will participate and other suggestions have been made for fundraising,” she said. “Hopefully between blue jean day and collecting we will get the $5,000 we need.”

Domangue has also made an effort to help raise funds.

“I reached out to our alumni group on Facebook about the drive to get the word out. We may not need it all for the playground itself; there’s a few other Catholic schools and churches that received significant damage,” she said.

She said conditions in her area remain serious south of Raceland and many people in the town remain without power and water.

“Half of Raceland is without power and some places without water, too; it’s places where the trees just ripped up the lines; they’re having to replace the waterlines. There is still a significant amount of people without power down here.”

Domangue said the water damage from the storm was from wind-driven rain.

“We did not get any water (storm surge) down here; it was from the hurricane (wind) damaging the roof and the rain coming in,” she said.

She said some unofficial wind readings for the area put gusts at 180 mph.

“This is a storm of the magnitude we have not seen before here, and it has devastated a large part of our several parishes,” said Suzanne Troxclair, Diocesan superintendent of schools. “With the challenges we have had with the COVID epidemic, we know our children’s normal at school has been very different since March of 2020, and this is a challenge on top of what we are already dealing with in our schools in terms of an outbreak of COVID.

“All of our schools have been impacted and we are just blessed for St. Aloysius to be able to support St. Mary’s Nativity in this way. The children, the faculty and the staff and the principal and the diocese are incredibly grateful for their support.”