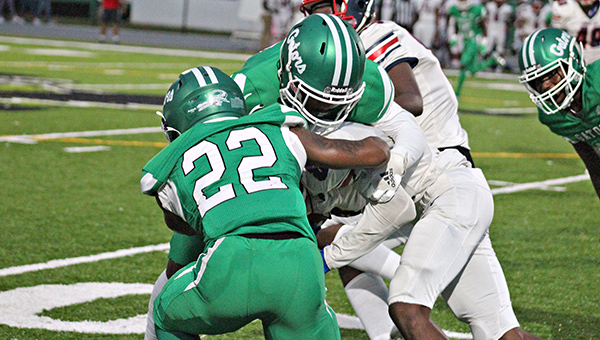 1
Even in its best seasons in recent years, Vicksburg High never had a reputation as an elite defensive team. The 2021 Gators are making a hard push to change that.

Vicksburg recorded its second consecutive shutout in a 46-0 victory over Forest Hill on Thursday. It has allowed seven points in its last three games, and none in the last 11 quarters.

The strong defense has translated to a 2-0 start in MHSAA Region 2-5A — the first time the program has done that since 2007 — heading into this Friday’s homecoming game against Jim Hill. Head coach Todd McDaniel said it was an X-factor, as much as the X’s and O’s, that sparked the turnaround.

“Aggressiveness, tenacity, kids playing together and loving one another. You hear me say ‘love’ a lot, but people don’t understand that that’s the X-factor,” McDaniel said. “You’re not going to play for each other if you don’t love the guy next to you. You’ve got to be brothers.”

Vicksburg (2-2, 2-0 Region 2-5A) has posted back-to-back shutouts for the first time since having three in a row late in the 2008 season. Besides not allowing points, however, the Gators’ defense is scoring them.

Eric Wesley had a fumble return touchdown in a 45-0 win over Canton on Sept. 10, and then against Forest Hill both Kearris Gilliam and Julien Demby returned interceptions for touchdowns.

The Gators had five takeaways in all against Forest Hill — one was a fumbled kickoff return — that led to 27 points. The worst starting field position in eight possessions for Vicksburg’s offense was its own 42-yard line.

2
One of the most intriguing games of the Mississippi high school football season lived up to the hype Friday, when MAIS Class 3A champion Greenville Christian defeated MHSAA Class 6A champ Oak Grove 48-41.

Greenville Christian has 31 players on the roster, compared to more than 100 for Oak Grove, making it a curious battle of David and Goliath as well as private vs. public.

Greenville Christian jumped out to a 26-7 lead in the first half before Oak Grove stormed back to go ahead 27-26 in the third quarter. Running back Marlon Palmer scored on a 63-yard run to put GCS back in front, and the Saints stayed in front from there.

Quarterback D.J. Smith passed for 302 yards and two touchdowns, and running back Palmer had 205 rushing yards for Greenville Christian.

3
Ole Miss quarterback Matt Corral kept the Rebels rolling, bolstered his Heisman Trophy buzz, and set a few records in the process during a 61-21 rout of Tulane on Saturday.

Corral became the first Southeastern Conference quarterback to throw three touchdown passes and run for three touchdowns in the same game, and joined former Kansas State quarterback Collin Klein (2012) as the only FBS players to accomplish the feat.

Corral also became the first Ole Miss player to account for seven TDs in a single game since Arnold “Showboat” Boykin in 1951. Corral was 23-of-31 passing for 335 yards, and ran for 68 yards on 13 carries. On Monday he was named the SEC Offensive Player of the Week.

“I know I’m not supposed to do it, but I’m not really thinking about it. I’m just playing football,” Corral said of running that often.

Ole Miss tied the SEC record with 41 first downs, which was only four short of the NCAA Division I record. The previous school record was 36, set against Chattanooga in 1971 and tied against Memphis in 1980.

“It’s good just to start our rhythm — get in and get out. Starting fast, creating completions, getting positive yards. All of those little things compound into big things, and that’s the touchdown,” Corral said.

4
Southeastern Conference officials were put in the spotlight for all the wrong reasons on Saturday — twice.

Two blunders by SEC officiating crews, one in the Mississippi State-Memphis game and the other in the Penn State vs. Auburn contest, forced the conference to issue statements admitting the errors.

The MSU-Memphis mistake came on a punt return with about six minutes left in the fourth quarter. Mississippi State appeared to down the ball at the 6-yard line and an official signaled the play dead, but Memphis’ Calvin Austin picked up the ball and ran 94 yards for a touchdown that gave the Tigers a 28-17 lead.

In a statement released Saturday night, the SEC said the play should have been blown dead because of the inadvertent signal. The replay official also should have also called for a review. Neither happened, the touchdown stood, and Memphis went on to win 31-29.

Memphis also had two players wearing the same jersey number, which is a penalty. It was not called, and the SEC admitted the error.

“I appreciate the transparency of the SEC and the admission of officiating errors yesterday,” Mississippi State athletic director John Cohen said in a statement released Sunday. “It is extremely disappointing when student-athletes are not fully in control of a game’s outcome, especially when taking into consideration the time, effort and resources put into an officiating system created to eliminate human error on the field whenever possible. The entire SEC has an expecation that the process will work as intended. Our football program’s focus is now on LSU.”

The Auburn-Penn State blunder centered on an intentional grounding call in the second quarter. Penn State was called for the penalty and lost a down it should not have. The mistake was discovered several series later, at which time it was too late to correct it.