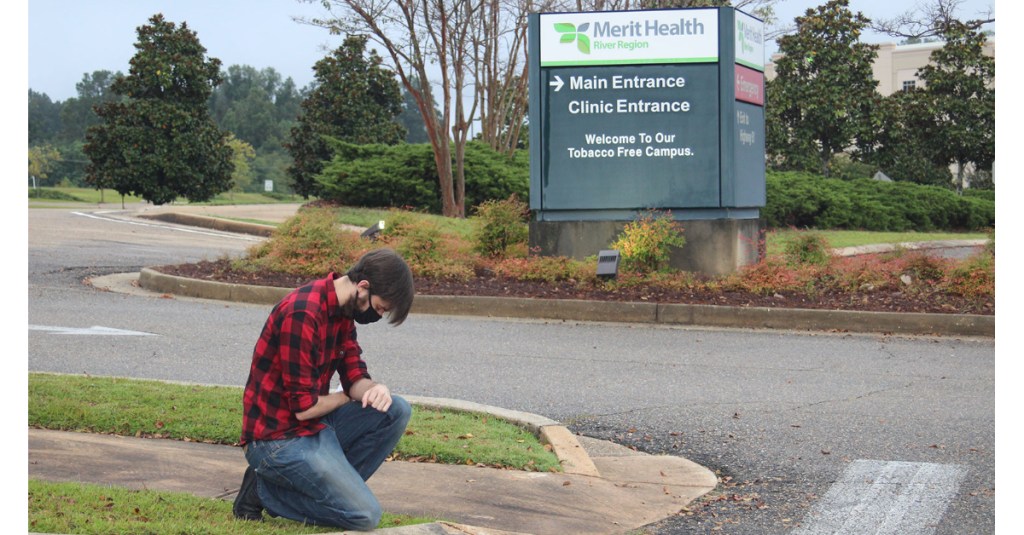 Alvin Foster kneels as he prays for COVID-19 patients and the medical staff at River Region Medical Center. Foster was one of about 12 people who met at the hospital Saturday for a community prayer service. (Photo by John Surratt | The Vicksburg Post)

The 8 a.m. sky was gray and the sound of thunder rolled in the sky Saturday as a dozen people gathered at a grassy area in front of Merit Health River Region Medical Center to pray for the patients suffering from COVID-19 and the medical teams helping them fight the disease.

Chandler Jackson, a member of Crossway Church and one of the organizers of the one-hour community prayer service, said that while Crossway held a similar program earlier this year, “We reached out to other churches across town to gather and pray for the hospital, for the patients, the medical staff and also for those who have been lost to COVID; families who are dealing with the loss.”

“This is a fight that they’ve (the hospital) been in for a while and there’s no sign of ending,” said Kelly Lafferty, another organizer. “I think for them, it’s an exhausting thing and it helps for them to receive some encouragement. I’m glad we’re able to do that for them.”

Jackson said the idea for the prayer service came from a friend of Crossway Church who called the church with an idea.

“The way he put it, he felt like he had a vision from God about people praying around the church,” he said. “He reached out to me and asked me to help the church execute this vision. He planted the seed and we took it on.”

The people attending the service went to other areas of the medical center campus either individually or as a small group to pray. They carried a prayer guide to help them with their efforts.

“When we organized this, we put out these prayer guides,” Chandler said. “We know that prayer is something some people may struggle with and may be something that’s kind of new and intimidating for people, so we wanted to make it as easy as we could.”

He said the prayer guides “walk them through what we understand prayer to be — asking God to come and be present with us and speaking with God about what’s going on in our lives and at the end thank him for being in our lives.”

“It’s a wonderful thing when you’re standing around with other fellow believers watching them have faith in the power of prayer, but at the same time, there’s such a somberness to the situation because we’re praying for such a serious situation,” he said.

Jackson and Lafferty said they hope the community prayer service will become a regular activity.

“Hopefully, we will encourage people to have a mindset for prayer and be praying for these things frequently,” Lafferty said. “I think it would be a great idea if we have some members of the community make it a point on Saturday to come over and pray (at the hospital).

“We’ve been in this for a while and so it can be forgotten,” she said. “I think there’s a level of frustration, but there are still people who are actively in the battlefield fighting; our medical professionals and then the patients that are in there actually fighting for their lives.”