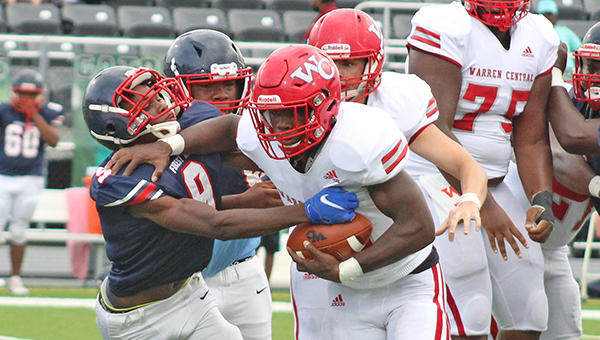 Hello, Warren Central. Welcome to Region 3-6A. Your first assignment is to take down the reigning kings of Class 6A.

Warren Central (3-0) jumps fully into a new era Friday night when defending MHSAA Class 6A champion Oak Grove (2-1) comes to Highway 27. It’s the Region 3-6A opener for both teams — and Warren Central’s first foray into the South half of the MHSAA’s top division since 1994.

The last round of reclassification brought a new set of opponents and challenges along with a fresh schedule, beginning with a showdown against the program that has represented the South in the Class 6A championship game each of the past three seasons.

“You don’t get these opportunities very often,” Warren Central coach Josh Morgan said. “Not only is it opening the district, you’re opening with the team that’s been the most dominant in recent years. They played in the last three state championships. If you’re a competitor, yeah it brings a certain opportunity with it that truly doesn’t come around very often.”

This year’s version won its first two games before having a 15-game winning streak snapped with a 48-41 loss to MAIS powerhouse Greenville Christian last week. Oak Grove was ranked No. 1 in the Mississippi Associated Press overall poll until falling to No. 3 this week.

Morgan said the Warriors’ loss might have come at a bad time for his team.

“I don’t know if they’re wounded. Maybe ticked off,” he said with a laugh. “We have a lot of respect for them. Right now it’s about competing when you start playing district games. What you do now is going to have weight toward the end of the year. We’re excited about the best football team the past three years, consistently, coming to our place.”

Warren Central is heading into region play with a 3-0 record for the second season in a row, and has been tested during its non-region schedule. After routing Forest Hill 27-0 in the Red Carpet Bowl, the Vikings defeated Vicksburg and Germantown by a total of four points.

The close calls sent them into their bye week on a positive note, but also with the sense that there is plenty of work still to do.

“I thought we had a good bye week. It sure helps going in with a lot of momentum from the Germantown game. We knew we need to get better, but it’s always better to ride that momentum and continue that. What a ride it has been already the first three weeks,” Morgan said.

Against Germantown, the Vikings overcame a 12-point deficit in the fourth quarter and scored on the final play to win 27-24. Backup quarterback Jack Wright led the game-winning drive and finished it with a 6-yard touchdown pass to Trey Hall.

Morgan said both Wright and starter Hartley Sullivan will play against Oak Grove, just as they’ve done in all three games so far. Sullivan is 17-of-27 passing for 77 yards and one touchdown this season, and Wright is 8-of-14 for 177 yards and two touchdowns. One of Wright’s touchdowns was a 61-yarder against Forest Hill.

Whoever throws the ball, Morgan said he was just happy to be undefeated heading into the region portion of the schedule. The path there hasn’t necessarily been pretty — the Vikings are averaging only 222.3 yards per game — but it has gotten results. And the results, Morgan said, are what really matters in the end.

“Our team is gritty and has found ways to win. Winning is hard to do in this league,” Morgan said. “We’re proud to be sitting where we are, but that season is completely over and this is the big season where it starts. We’re trying to constantly get better and improve. Hopefully we won’t make the same mistakes we’ve made already and we can continue to grow.”