Eli reflects on career, life as Giants prepare to retire his number 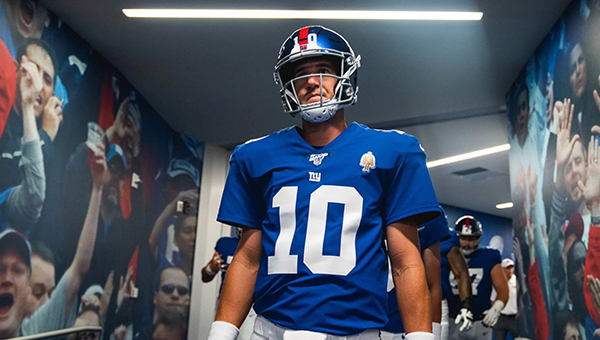 Eli Manning walks through the tunnel before a game with the New York Giants. The former Ole Miss star won two Super Bowls during his 16-year career with the Giants, and the team will retire his jersey before Sunday's game against Atlanta. (Matthew Swensen/The New York Giants)

EAST RUTHERFORD, N.J. (AP) — When two-time Super Bowl MVP Eli Manning walked away from the New York Giants in January 2020 after a 16-year career, he really had no plans.

As a quarterback, he had prepared for every contingency on the field. Retirement was foreign to him, yet somewhat of a welcome relief.

No more big hits. No more Monday morning aches and pains. No more weekends away from the family.

Manning held a virtual conference call Thursday to discuss his career as the Giants prepare to retire his No. 10 jersey and add his name to their Ring of Honor at MetLife Stadium on Sunday at halftime of a game against Atlanta.

During the meeting with the media, Manning was relaxed, smiled a lot and was open with his answers.

He said he had no regrets about retiring and no desire to ever come back. He made it clear that three straight losing seasons were a big part of the decision to retire.

“You know, the losses just hurt more,” the 40-year-old Manning said. “They affect your sleep. They affect your week. It affects family life with wife and kids. And it was just I just got too much.”

While Manning knew it was time to retire, he had no plans. All he wanted to do was reflect on the good and happy moments, the friendships he had made and big wins they celebrated.

The COVID-19 pandemic helped Manning maintain some solitude. After 12 months, he realized he still loved the game, but not as a player anymore. He liked prepping for games, watching and analyzing film and talking about football. He admits he doesn’t know the name of every player on the field, but he likes rewinding plays and explaining them to the audience.

“I don’t know how to read a spreadsheet,” Manning said. “I don’t know everything going on in the world all over the place. But I know the game of football and I enjoy talking about it.”

It led to a gig with his brother, Peyton, on “Monday Night Football,” which also allowed him to remain at home, where he could be with his wife and family, and coach his children’s sports teams.

One thing that did continue was his appearances on commercials for cars, hot sauces and barbecues. Some are with family members and he really enjoys that.

“I think those are always kind of a way to not take yourself too seriously in a way to show your personality, and that was how I did it while I was a player,” Manning said of the commercials. “Now I think it’s another way to continue showing the lighter side of things.”

Manning added to post-career jobs this year by joining the Giants’ front office. His primary focus is marketing and business development. He is involved in community initiatives, content creation and customer engagement. There were a lot of days at training camp he talked with select visitors at practices.

Manning started wearing the No. 10 at Ole Miss. His father, Archie, had worn No. 18 at Ole Miss and the school retired it. Mississippi officials offered to take it out of retirement for him, but Eli Manning declined. He wanted a double-digit number and settled on No. 10.

After being traded to the Giants by the Chargers on draft night, Manning struck a deal on the telephone with punter Jeff Feagles to trade for the number. It cost him a trip to Florida.

“If it would have been something outrageous. I probably would have moved on about it,” Manning quipped.

Manning said there were many wonderful moments in his career. Naturally, one that might have impacted his career the most was beating the then-unbeaten Patriots in the Super Bowl in February 2008. It was the first of two Super Bowls Manning and coach Tom Coughlin combined to win.

“I mean, that whole playoff stretch was, you know, probably very, very important in my career and in coach Coughlin’s,” Manning said. “We were both on that line of: ‘Do these guys have what it takes or not?’ ”

The Giants played all four playoffs games on the road that postseason in winning the Super Bowl.

Manning expects the ceremony Sunday to be emotional, but said he will focus on members of the organization who were part of his career. His believes his legacy will be starting almost every single week. He was durable and said he worked hard every year to earn the respect of his teammates, from the rookies to the veterans.

“It’s going to be special. It’s obviously a very emotional day and kind of one last farewell to all those fans wearing the No. 10, and all of them that were supporting me during my time with the Giants continue to support me,” he said. “And so as I appreciate their loyalty and their support through all these years.”