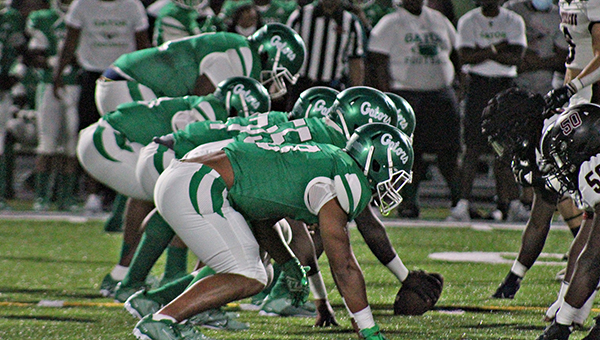 The Vicksburg Gators get ready to run a play in the Red Carpet Bowl against Germantown. Vicksburg will play Jim Hill Friday at 7 p.m. for homecoming. (Ernest Bowker/The Vicksburg Post)

Suddenly, there is a lot of excitement about the future of Vicksburg High’s football program and the potential for this year’s squad.

The Gators have not allowed a point in 11 quarters and outscored their last two opponents 91-0. They’re 2-0 in MHSAA Region 2-5A — the first time that has happened in 14 years — and in a three-way tie for first place. Even head coach Todd McDaniel admits he’s excited about how good the team can be at the end of the season compared to its halfway point.

All of that, though, would go against the Gators’ mantra.

“We always tell them enjoy it Friday and Saturday, and Sunday it’s back to work. (Defensive coordinator Christopher) Lacey came up with this phrase ‘no faces,’ meaning it doesn’t matter who we play on Friday, just come out and play,” McDaniel said.

That means not looking too far down the road, to the final stretch of games against Region 2-5A heavy hitters Ridgeland, Neshoba Central and Holmes County Central. It means taking care of business against even the seemingly lesser opponents, like Jim Hill (0-2, 0-1 Region 2-5A) this Friday for homecoming.

“Our goal is to win the district, but we’re going to take it one at a time. I told them the other night you can’t make two tackles at one time and you can’t score two touchdowns at one time. You’ve got to play each opponent one at a time,” McDaniel said. “We want to go out there and get this homecoming win for our alumni that are coming back, we want them to enjoy it, but most of all we want to get focused on Jim Hill.”

Jim Hill was blown out 54-0 in its region opener against Ridgeland two weeks ago and is not a historical power. Its last playoff apperance was in 2012, and its last winning season was in 2003. Like all of the other members of the

Jackson Public Schools district, it did not play in 2020 because of COVID-19 concerns.
McDaniel still was wary, though, calling the Tigers a potentially dangerous opponent if his Gators take them lightly.

“They’re extremely talented. They have some people that can run,” McDaniel said. “We can’t let them get the big play. I haven’t seen them really drive the whole field, but you’ve got to minimize the big plays that they make — and they are very capable of making big plays.”

If defense is the key to victory, then the Gators certainly seem in possession of it. They’ve posted back-to-back shutouts for the first time since late in the 2008 season, when they had three in a row.

The defense has scored three touchdowns in its last two games, and forced five turnovers against Forest Hill that led to 27 points in the 46-0 victory.

Vicksburg had 366 rushing yards against Canton and 248 against Forest Hill as well. The difference was mostly attributable to the VHS defense setting up the offense with short fields.

Vicksburg has not started 3-0 in region play since 2003. It has a long way to go and a lot of work to do in order to claim its first region championship since 1990, but the pieces are falling into place to at least contend for it.

Checking off historical milestones early, McDaniel said, is motivation to push for bigger ones later on.

“That’s a motivational factor for us to come out and play even better this week,” McDaniel said. “We want to represent Vicksburg. We want to represent the community. We want people to know that when you come to The Swamp, it’s no more easy wins. You have to come down here and earn it.”