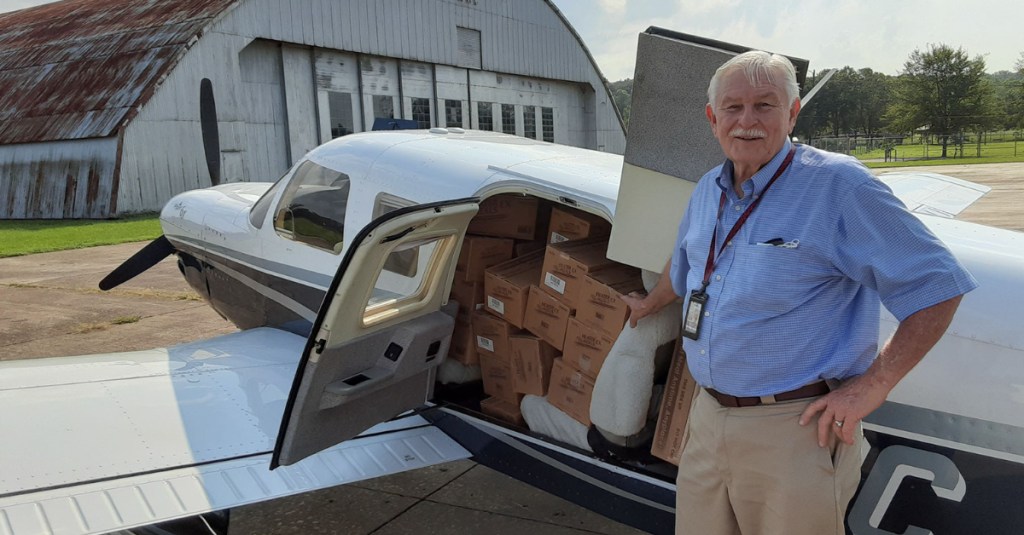 Vicksburg Municipal Airport Director Ron Davis stands next to a plane loaded down with items collected for victims of Hurricane Ida in the Hammond, La., area. (Photo submitted)

For a brief period after Hurricane Ida, the Vicksburg Municipal Airport was a collection point for supplies to help the storm’s victims.

The mobilization began immediately after the storm when Airport Director Ron Davis responded to an email from fellow airport director David Lobue at the Hammond North Shore Regional Airport in Hammond, La., on the American Association of Airport Executives website.

Hammond was one of the cities hit hard by Hurricane Ida.

“I called him and asked him what he needed and he said water,” Davis said. “The city donated two pallets of bottled water. Altogether, we sent three pallets of water. There were about 60 of those 24-bottle packages on each one of those pallets. I remember the weight — it was 2,500 pounds.”

Davis said a local church donated 800 MRE-style heat and eat meals that were given by the Red Cross. The meals were flown to Hammond by pilot Scott Woods, who volunteered to fly the meals in his airplane. Other items, Davis said, were delivered by truck.

“We found we could take more items at one time using a truck than we could using planes,” he said.

Besides the water and the meals, Davis said Home Depot donated a pallet of industrial-grade trash bags and other residents bought and donated items like disposable diapers and cleaning supplies that were shipped to Hammond.

“Once the items got to Hammond, they were divided up and loaded on planes and flown to smaller airports in areas that were hit because the roads were still blocked,” he said.

Davis said Lobue told him recently officials with the Federal Emergency Management Agency have since taken over the job of getting and distributing supplies to areas hit by Ida.

“He said Hammond is no longer accepting things,” Davis said, adding he has also stopped taking donations at the airport.

“I’m glad we were able to help,” he said. “We asked for volunteers and donations and it was amazing the way the people here responded.”