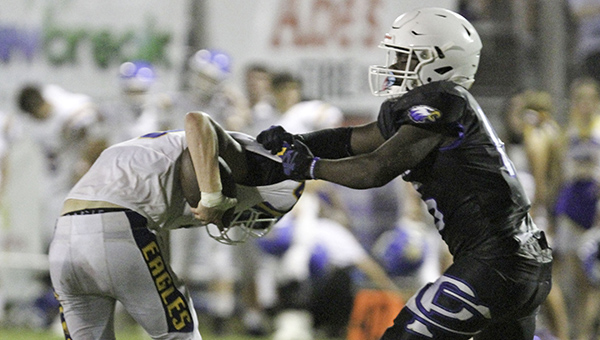 Porter’s Chapel Academy has reached the halfway point of its season with a winning record and some genuine playoff aspirations, but not a ton of momentum.

The Eagles have a 3-2 record, but have yet to win back-to-back games or beat a top-tier team. They’ll have the opportunity to do both when undefeated Wilkinson County Christian Academy (5-0) comes to visit on Friday night.

“It’s huge. It’ll be our third opportunity to win two in a row. We need to find a way to be successful at that going into our next district game next week. Coming off back-to-back wins going into that is as good of a position as you can be in going forward,” PCA coach Blake Purvis said. “We’ve got to build off it week to week, and build off our success so we can continue to get momentum rolling instead of going back and forth.”

PCA (3-2) has won in odd-numbered weeks — including a 52-6 romp against Ben’s Ford last Friday — and lost in even-numbered weeks. The losses have come against two-time defending Class 2A champion Manchester Academy and District 3-2A rival Claiborne, while the three wins were against teams with a combined record of 3-12.

As he tries to return PCA to the MAIS postseason for the first time since 2014, Purvis wasn’t about to dismiss the victories they’ve earned. But, he added, handing a championship contender like WCCA a loss would be a much bigger win than most.

“If you can beat a 5-0 team, it bodes well for you. It would help validate the process,” Purvis said. “Right now we’re in a position where we’ve won the games we’re supposed to, and we’ve fallen against a little bit better opponents. Being able to get that win against a good, quality opponent should help establish even more momentum and validate the process and what we’re doing. There’s a lot of things on the line this week as far as that goes.”

Wanting to beat a 5-0 team is one thing. Actually doing it is another.

Although it is a Class 1A program, Wilkinson County Christian features three starting linemen that are 250 pounds or larger. It has scored at least 32 points in each of its games, while the defense has posted two shutouts.

“They’ve got athletes and linemen. It’s a good mix of a championship football team. I think they’re going to be right there at the end of the season in 1A,” Purvis said.

PCA, meanwhile, has a balanced offensive attack and is coming off a lopsided win against Ben’s Ford that restored some of the swagger it lost in a 52-6 defeat against Claiborne Academy the week before.

Purvis said it was good for the Eagles to right the ship after their worst outing of the season, but now it’s also important to keep moving it forward.

“Any time you’re coming off a loss, bouncing back and getting that win so you don’t start a streak is a good thing,” he said. “But we’ve got to advance that a step forward and string some wins together moving off of this.”